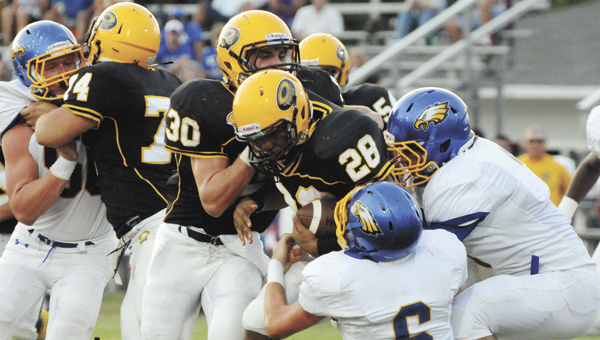 The mid-season battle between Straughn and Opp will unfold tonight at Channel-Lee Stadium, and both teams are gearing up to put on a show for their spectators.

For the past seven years, the Tigers have held a winning edge over the Bobcats. Straughn currently holds a 6-1 record over Opp.

Straughn’s only loss to Opp came in 2009, where the Tigers fell 20-7 while they were in Class 3A, and the Bobcats were in Class 4A.

The Tigers are coming off a close 27-26 overtime loss to region opponent Hillcrest-Evergreen, while the Bobcats enter this week’s contest with a 33-12 win over Geneva on their backs.

SHS head football coach Trent Taylor said there have been some “good ball games in the past.”

“I know they’re (the Bobcats) going to play hard, and I believe our kids will too,” Taylor said. “Obviously, we’re not where we want to be at this point. I reminded the kids (Monday) that two years ago, we were in the same spot. Unfortunately, we lost to Opp that year and went on a seven-game win streak right after that. I’m certainly not prophesying any of that. “I’m just trying to make sure our kids understand that sometimes bad things happen to you,” he said. “You’ve got to bounce back, and hopefully we’ll do that.”

Straughn’s offense is led by Turvin at quarterback. He is 16-of-27 for 252 yards and five touchdowns in the air, and has 264 yards and three touchdowns on the ground. Turvin is the second most rusher for the Tigers, right under Short who has 278 yards and four touchdowns.

Turvin said he is fully aware of what Opp brings to the table with its strong defensive play.

“That’s basically what it comes down to,” Hall said.

Whigham said he knows that Straughn changed to an “I” formation a couple weeks ago, and that the Tigers are capable of switching back to their old option-run offense on the fly.

“We’re preparing for a multiple look, and I’m sure they have a lot of stuff going with them (the looks),” he said.

“When you watch them on film, it’s easy to see why (they are playing well),” Taylor said. “I think their interior defensive linemen and two linebackers probably get after it as well as anybody we’ve seen all year.”

When asked what Taylor has stressed to the team at practice this week, Hall and Turvin said it’s been all about getting better as a team.

“We’ve got to play better than we have in the last two weeks,” Turvin said. “He’s said, ‘each week we have to get better. We can’t be the same team we were two weeks ago than we are now.”