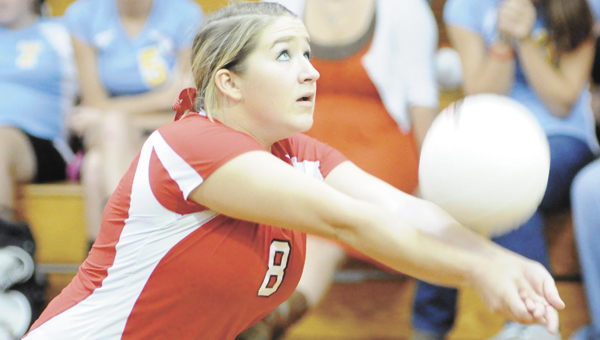 The Pleasant Home Lady Eagles cruised through their competition Saturday, defeating Class 4A’s W.S. Neal 25-23, 25-12 in the championship for their first tournament victory on home territory.

“It was an experience to run one,” PHS volleyball coach Jerry Davis said about the tournament. “I’ve run a lot of basketball tournaments. I just wanted to put one on to see how it all went.”

The Lady Eagles beat Laurel Hill in the semifinals of the winner’s bracket 25-5, 25-15 to advance to the championship game.

Laurel Hill dropped down to the loser’s bracket after falling to PHS, where it lost to W.S. Neal in the bracket elimination game.

Pleasant Home improves to 10-7 this season after the tournament win.

“We had a decent crowd before it was all said and done,” Davis said. “It was experience, and we’re glad to get a win out of it.”

Davis said a big factor that contributed to his team’s win was the wait between matches, which gave the Lady Eagles time to rest.

“In the first game (against Laurel Hill), I thought we didn’t play well at all,” McNeil said. “I don’t know what the problem was.

“In the second game (against W.S. Neal), I thought they played much better,” she said. “They’re not wanting to commit to hitting the ball until absolutely they’re sure they have it. That’s one of the biggest areas we need to work on. We’re still not consistent with our serving. If you’re not serving across the net, you’re not going to win the game.”

The Lady Wildcats will play host to Red Level today at 4 p.m., and Pleasant Home travels to play Elba in a regular season tri-match.