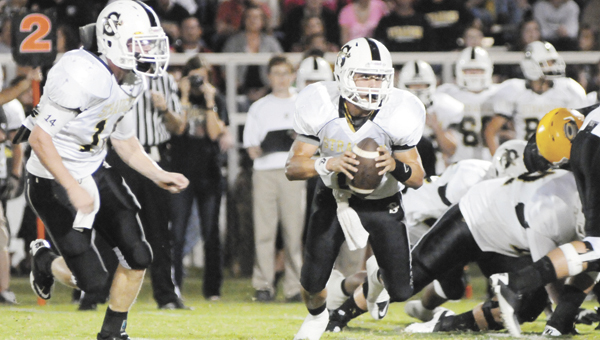 The next four games are important for any high school football team vying for a spot in the post season, sports enthusiasts say.

But for the Straughn Tigers, winning three out of the next four region games is a must for the team as they begin their trek Friday night in Union Springs against Bullock County.

“Our kids know what these next four ball games mean,” SHS head football coach Trent Taylor said. “They know that in order to have a chance at the playoffs, that we need to win three out of these next four. That’s everybody’s goal at this point.”

The Tigers will be facing a Hornets team that utilizes its passing game a lot during contests, as was seen in film sessions this week, Taylor said.

“They have some big ole tall receivers,” he said.

“We’re really trying to make our kids understand that they do some things that are real advantageous for them, and not for us,” Taylor said. “I think our kids have an understanding of that. I think with what’s happened to us this year, I don’t think our kids will take anyone lightly for the rest of the way.”

On last week’s win over the Bobcats, Taylor said that win came as a result of the players being focused from the start.

“Obviously, that was a huge win for us Friday night,” he said. “It was a game I think both teams played their hearts out. Fortunately, for us, we made one more stop than they did. I think that was certainly what this team needed.”

During the week, Taylor said the coaches have been drilling the players, letting them know that Bullock County will throw the “deep ball” in the game this week.

“The one thing we’ve tried to tell our kids is that Bullock County threw a lot more short passes against Andalusia, and that was because they felt like they can match up with them speed-wise,” he said. “I think their mind set against us is that, ‘we can run by them.’ We’re trying to make them aware that they’re probably going to see a lot more deep ball than what they saw on (the Andalusia) film.”

Taylor said practice has been “focused” this week.

“We’ve had a good week,” he said. “It’s a whole lot easier to watch film on yourself after you won a game like that (against Opp).

“Obviously, you still have mistakes you want to point out,” he said. “When you’ve won, and you know the outcome, they’re a little more conducive to learning.

“We’ve got four big weeks here in a row,” he said. “I think our kids are very aware of that. We can’t look at ahead. We’ve got to look at this one.”

Kick off in Union Springs is at 7 p.m. tomorrow.