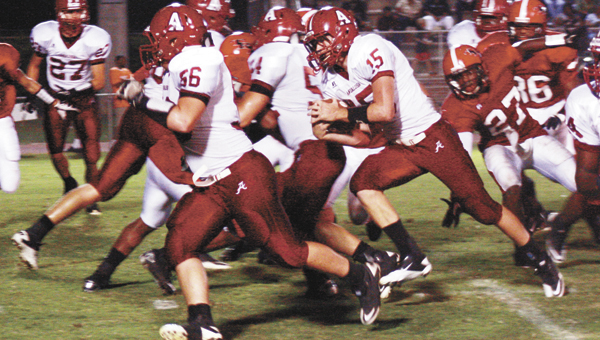 Andalusia head football coach Brian Seymore said the Bulldogs will need to enter tonight’s game on the road against Hillcrest-Evergreen with the same intensity and focus as last week.

The seventh-ranked Bulldogs beat T.R. Miller 35-10 last Friday night, and held the Tigers to three points the majority of the game.

AHS will be facing a Jaguars team with a quarterback-wide receiver combination that utilizes “big plays” on offense, Seymore said.

“We have a big region game (tonight) and it’s important,” he said. “I think we’ve got to come out of the locker room with some intensity.”

Seymore said the Jaguars (3-2, 1-2 in Class 4A, Region 2) have crippled a couple opponents throwing the “deep ball.”

However, Seymore said the Bulldog defensive line will need to institute a “pass-rush” attack this week to give the defensive backs some help in the back field.

Against T.R. Miller, Andalusia’s C.P. Rogers (quarterback) and Jacard Townsend (tailback) had two touchdowns each, and exploded for a combined 195 yards on the ground.

Junior running back Ralph Sims added 106 yards on seven carries and scored one touchdown for the Bulldogs.

In the second half of Andalusia’s victory last week, the Bulldogs executed their running game to no end, running the clock down.

Seymore said at that time in the game, it was a good game plan for the team.

“I didn’t want a turnover or a pass to stop the clock,” he said. “Our offensive line did such a good job running together. I felt like pounding against the tackles to keep the clock running.

“We’ll mix it up more this week,” he said. “We’ll take our shots down field. The key to us is to make sure to spread the ball out and give a lot of different guys some touches. ”

Playing at home is a lot different than playing on the road, Seymore said.

“It’s always a test to play on the road, and we’ve got to be ready to play,” he said.

Kick off in Evergreen is at 7 tonight.