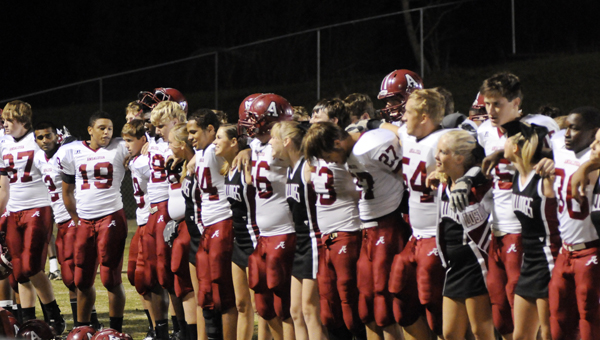 Andalusia players and cheerleaders sing the alma mater after the Bulldogs 40-6 win over Hillcrest-Evergreen on Friday night. | Andrew Garner/Star-News

EVERGREEN — Andalusia had 359 yards rushing on the ground and scored six touchdowns in a 40-6 rout over Hillcrest-Evergreen on Friday night.

Andalusia got off to a slow start on offense with a few false start and off sides calls on the Bulldogs.

However, the Bulldogs scored on their first drive when senior tailback Jacard Townsend scored his first of three touchdowns from the 13-yard line with 5:58 remaining in the first quarter. Townsend, who rushed 74 yards on 11 carries, punched the 2-point conversion in as well, giving Andalusia an early 8-0 lead.

With this victory, Andalusia remains undefeated at 6-0 overall, and 4-0 in Class 4A, Region 2. The Bulldogs will play host to rival Straughn next week. The last time both met, Andalusia came away with a 10-0 victory over the Tigers at SHS.

“I don’t really feel like we executed well on offense,” AHS head football coach Brian Seymore said. “We had some false starts and fumbled the ball a few times. I kind of figured it would be a little tough coming off T.R. Miller with it being such a big win and all. We made a few adjustments here and there on offense, but they were giving us a lot of guys in the box. I still feel like we can execute a little better offensively.”

The Bulldog defense has allowed an average of 10 points per game so far this season.

Friday night was no different for Andalusia’s defense.

Andalusia senior defensive back Lakelyus “Fathead” Adams put himself in the right position at the right time to catch two interceptions from Hillcrest-Evergreen’s Keyshawn Roache.

“Fathead’s consistent,” Seymore said. “He’s going to be where he needs to be. He’s going to get the defensive secondary set up and make sure everybody’s in the right spot. He does a good job of baiting quarterbacks.

“Our goal is every week is to try to get better,” he added. “I like where we’re at as far as the football team is concerned.”

The first interception netted nothing for Andalusia on offense. The Bulldogs and Hillcrest-Evergreen had nothing going on their offenses on the next two drives.

Andalusia got back on board with 1:04 remaining in the first half.

The Jaguars fumbled the ball, Andalusia recovered and Ralph Sims punched it in with 59.4 seconds remaining from the 1-yard line. The extra point was no good from Andalusia’s Courey Hopkins. 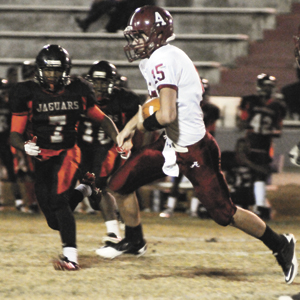 Seymore said the special teams is still a “work in progress,” but the coverage and blocking on kick offs looked great.

“We finally did a good job of covering the kicks outside the numbers,” he said. “The coverage was solid tonight on kick offs.”

On the opening drive of the second half, Andalusia’s C.P. Rogers, who led the Bulldogs with 161 yards on 16 carries, took the ball 63 yards for a score on a drive up the middle to help give the Bulldogs a 20-0 lead with the 2-point conversion no good.

The Jaguars and Bulldogs traded offensive possessions, and Andalusia capitalized on another Hillcrest fumble with 1:19 left in the third quarter. Will Harrison recovered the fumble for the Bulldogs that led to Townsend’s second touchdown rush from 3 yards out. The extra point was no good, and Andalusia led 28-0.

On the ensuing kick off, the Bulldogs got the ball back with 1:03 on another fumble recovery by Andalusia junior Zach Ward.

Townsend scored his third TD of the night from the 1-yard line to open the fourth quarter. The Bulldogs took a 34-0 lead after a 3-yard pass from sophomore quarterback Michael McCalman to Carlos Luckie.

With 11:29 left in the game, Andalusia found itself with the ball again on another Jaguars turn over, that led to a McCalman 16-yard touchdown rush.

Andalusia’s second team came in with less than eight minutes remaining in the contest, and gave up a turn over for the Jaguars.

Hillcrest took advantage and scored on an 18-yard rush from Kyantrae Lewis with 19.4 seconds remaining.

David Mahaffey had one reception for 22 yards for the Bulldogs.