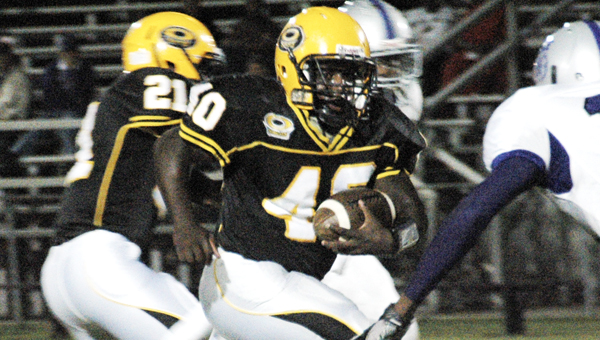 Opp is one win away from clinching a Class 3A state playoff berth, and there are two things standing in the way of the Bobcats — Dale County and homecoming.

The last time Opp was in the playoffs was in 2009, while a Class 4A school. The Bobcats beat rival Andalusia in the first round, but fell to Jackson in the second round, both at Channel-Lee Stadium.

OHS head football coach Jack Whigham said homecoming week is full of activities, and that he hopes the players are focused.

“Homecoming is a big time,” Whigham said, “but the most important thing for the football team is to win the game.”

The Warriors’ only win came in week three against Pike County, who they beat 7-6. Opp defeated Pike County last week 28-6.

The closest DCHS came to a win, other than the victory over the Bulldogs, was in week two at Geneva, where the Warriors lost 22-20.

Whigham said playing for win this week for homecoming and securing a playoff berth should be enough to keep the players focused this week.

“Hopefully that’s enough to get them focused,” he said. “We still have a chance to go undefeated in our region, and not only that, maybe win a chance to host a playoff game.

“If that doesn’t focus you, then I don’t have the answers as a coach,” he said. “It’s the next to last home game for us. If we’re not focused, then we’re going to have our work cut out for us. It’s about getting better for what we need to do that will help us down the road.”

The Bobcats improved to 4-2 overall, and 4-0 in Class 3A, Region 2 with their win over Pike County last week.