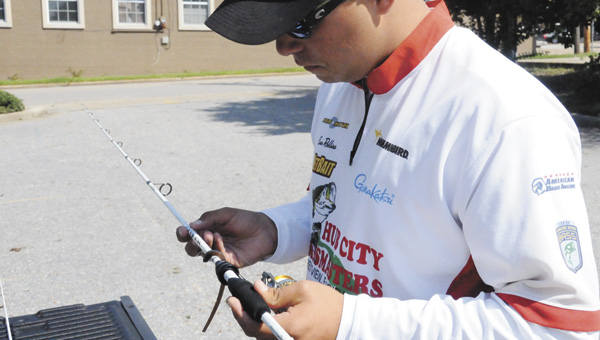 Evan Robbins shows one of his many rod and reels that he uses to fish in tournaments. | Andrew Garner/Star-News

The fishing boat is fueled, batteries are charged, bait and tackle are packed and the rod and reel are ready to bring in some bass.

This is a typical tournament start for aspiring professional fisherman and Florala native Evan Robbins, who has been fishing competitively for two years.

Last year, Robbins decided that he was going to do what he loves more often, and joined a bass club out of Crestview, Fla., called Hub City Bass Masters.

Robbins said he decided to take it up a notch, and fish in 12 tournaments this season.

In fact, Robbins qualified to fish at Lake Toho in Kissimmee, Fla., the first weekend of November for the state championship so he can make the Florida regional team.

His next major tournament will be in Kentucky in mid-October for the Bass Master Weekend Series Regional Championship in the Southern Region.

Robbins said he got into professional fishing through a friend.

“When I first got into it three years ago, a friend (Doyce Colvin of Opp) introduced me to the sport,” he said. “I always fished around the house in ponds, and I could catch them so easy. I said, ‘Man that’s easy. I can do this.’ And thought I was the best there was.

“I fished one tournament, and I figured out that that was not right,” he said. “It was very challenging.”

Robbins said despite the set back, he just kept doing it because he liked the challenge.

When he’s not fishing, Robbins is either in his last semester of aviation school at the Alabama Aviation Center in Ozark, or is putting out fires as a volunteer fire fighter.

An avid outdoorsman, Robbins said fishing in tournaments is similar to “hunting.”

“Bass are predators,” he added. “They’re going to follow their food.”

Robbins said the biggest fish he ever caught at a tournament was 7 pounds, and the time of year will depict whether the bass will be either skinny or fat.

“Before we launch at tournaments, and usually through practice you have an idea of where you want to fish,” he said. “Always, you’re trying to catch as much as possible. Throughout the year, the weights fluctuate. In the spring time, they’re fatter because they’re about to spawn and in the summer time, they’re in deep water and they’re really skinny.”

When asked why he loves fishing, Robbins said it’s “fun.”

“I love it,” he said. “You have to love this sport to do it. There’s been times I would drop everything and would never do it again, but I love it and I keep doing it. It’s always a challenge.”

Additionally, Robbins said through Hub City Bass Masters, they do charity work for Wounded Warriors and different activities with kids, introducing them to the sport.

“It’s a growing sport and more and more are getting interested in it,” Robbins said.