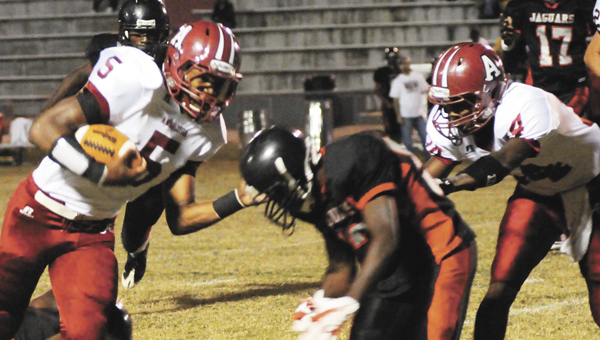 It’s Friday night lights and fans and a rivalry.

It’s for all the bragging rights.

The seventh-ranked Bulldogs and Tigers will meet tonight at AHS Stadium, extending a rivalry match up that goes back to the mid-1990s. After the 1995 season, both teams stopped playing each other for about nine years when they both started back up in 2004.

Andalusia holds a 6-3 edge over Straughn in the pairing’s match up.

But as much as it is a rivalry game, it’s also a region game in Class 4A, Region 2, AHS head football coach Brian Seymore said.

“There’s a lot at stake as far as region standings and playoffs positions,” Seymore said. “Our goal is to keep the overall No. 1 seed, and win the region. I know Straughn is trying to make a playoff run, and every game is important to them.

“It will be a great atmosphere in football on both sides,” he said.

“They have more running backs than the University of Alabama,” Taylor said. “I don’t think we’ve seen in any one ball game, two carrying the ball. All of them are very, very talented.

“The biggest difference is that we’re going to have to be real good on defense,” he said. “Andalusia has done a good job finding a way to distribute the ball on that side of the ball. It makes it real, real tough on the defensive side of the ball.”

The Bulldogs enter tonight’s region contest with a healthy 6-0 overall record, and a 4-0 record in the region. Straughn is 4-2 overall, and 2-2 in the region.

Andalusia’s two quarterbacks — C.P. Rogers and Michael McCalman — lead the Bulldogs in rushing with a combined 950 yards on 110 carries and six touchdowns.

“It looks to us the quarterbacks carry much of the load than anybody else does,” Taylor said about Rogers and McCalman. “Both of those kids do a good job.”

Additionally, senior tailback Jacard Townsend, who also plays at linebacker, has rushed for 377 yards on 40 carries and has scored 11 touchdowns.

Ralph Sims has rushed for 297 yards on 35 carries and has scored four touchdowns for the Bulldogs.

Straughn’s leading rusher Chase Short has carried for 466 yards and scored eight touchdowns for the Tigers. Senior quarterback Zack Turvin has rushed for 366 yards on 72 carries and has scored six touchdowns. 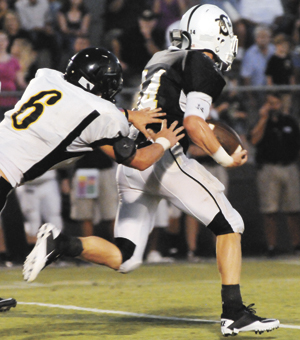 Devin Scott, is second in rushing for Straughn, having rushed for 387 yards on 55 carries so far this season.

“They’re a quality opponent,” Seymore said. “Offensively, it all starts with Zack. Zack’s done a good job for them this year. He does a good job managing the game. He has the ability to run the ball. If he doesn’t run it, then it’s Chase Short. He’s got a good burst. We’ve got to make sure we stop (Short) before he gets started because he has the ability to make some big plays for them in the full back position.

“I’ve been real impressed with Devin Scott,” he said. “He runs the ball well, and has the ability to make plays in the open field.”

On the defensive side of the ball, Seymore said “stopping the play” before it starts and “third down” are the main goals this week.

“If they’re running option, we’ve got to make sure we’re sound in our responsibilities and we’ve got to be disciplined in assignment football,” he said. “If you’re not disciplined on option football, then it can give you problems on defense.

“We’ve got to win those third down battles to get off the field,” he said. “I was real impressed how they controlled the ball the whole first quarter against Opp. If you’re offense ain’t on the field, you can’t score. They did a great job, not only controlling the ball the opening quarter, but they finished it off with a touchdown.”

For Straughn, Taylor said the main key on defense is playing “assignment football.”

“They have so many threats in many ways,” Taylor said. “They have done really well running counter. It’s designed to try and get people flowing one way. It’s not anything we haven’t seen before. Opp’s a big counter team.

“You just have to work on the things they do,” he said about the preparation. “The difference is they’re doing it with some tremendous athletes.”

When it all comes down to it, and the Friday night lights are on, it’s going to just be two teams playing a football team, Seymore said.

“I really think both sides will be pumped up,” he said. “When the first five minutes are up, the emotion and the hype will be up and you’ll go back to playing the game of football.

“I think both teams will be prepared to play football,” he said. “For four quarters, they’re the enemy. After the game, it goes back to being that we’re all friends away from the game. We expect it to be a four-quarter war. I think both sides will be very physical and both sides will play with a lot of heart and desire.”

Kick off in Andalusia is at 7 p.m.

Bulldogs, Tigers to battle in…

Andalusia smackdown Jacard Townsend may be a player of few words, but when on the football field, his actions speak... read more