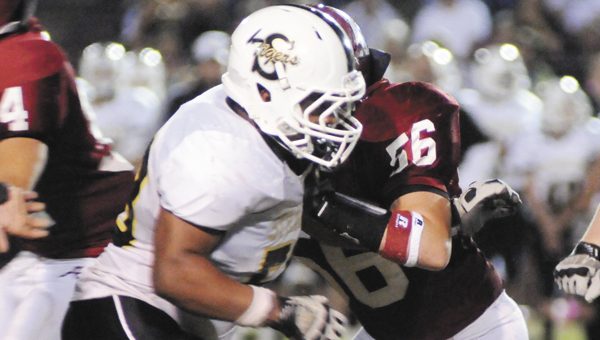 Andalusia’s speed and athleticism coupled with its defensive attack, helped lead the seventh-ranked Bulldogs to a 37-3 region victory over rival Straughn on Friday night at AHS Stadium.

With this win, the Bulldogs secure a spot in the state playoffs and remain undefeated this season, improving to 7-0 overall, and 5-0 in Class 4A, Region 2.

Next week, Andalusia will play host to Ashford for its last regular-season home game. This is an important game for the Bulldogs because it will determine where they will be seeded in the region.

Straughn falls to 4-3 overall, and 2-3 in the region. The Tigers need to win these next two region games against Headland and Ashford to have a chance at clinching a playoff berth.

The Tigers will play the Rams next week for their homecoming.

AHS stayed multidimensional on offense Friday night, scoring four touchdowns on the ground and one in the air.

“We came out of the locker room real focused,” AHS head football coach Brian Seymore said. “We played real physical. I was proud of our kids.

“We had to take our shots down the field,” he said of being multidimensional. “We felt like we could make some plays in the empty formation.”

The Bulldogs’ defense got off on a hot start in the first quarter, holding Straughn to a three-and-out on the Tigers’ first offensive possession of the night.

Senior tail back Jacard Townsend, who had 56 yards on five carries, completed Andalusia’s first ball possession with a 29-yard touchdown rush with 7:47 left in the first quarter. Townsend then completed the 2-point conversion, rushing from the 3-yard line to put the Bulldogs ahead 8-0.

Straughn, who had a total of six first downs, gave up its first of three fumbles on a 2nd-and-eight play from its own 36-yard line.

With the ball on the 26, Andalusia’s C.P. Rogers, who had 57 yards on 19 carries, helped the Bulldogs march down the field completing four rushes to the Straughn 13-yard line.

With 3:01 left in the first quarter, Lakelyus “Fathead” Adams punched the ball in from 13 yards for a score, and Rogers completed a 3-yard pass to senior receiver David Mahaffey for the 2-point conversion to increase Andalusia’s lead to 16-0. Mahaffey had two receptions for 19 yards for the Bulldogs.

Andalusia had the ball at the end of the first quarter, and completed the offensive possession on a 35-yard strike from Rogers to Wes Maye. The point after attempt was good by Courey Hopkins to put the Bulldogs ahead 23-0.

The Bulldogs tacked on one more touchdown with 3:49 left in the first half on a 12-yard rush by Rogers. The PAT by Hopkins was good, and AHS held a comfortable 30-0 lead at half time.

“With the rushing touchdown, it was just the (offensive) line blocking for me,” Rogers said. “Anybody can run behind them.”

Straughn got the ball back with 3:39 left, and ended up fumbling the ball, where Andalusia’s Catlin Jones, who had five tackles, recovered on the Straughn 33-yard line.

During the first half of play, Straughn’s Zack Turvin, who was 4-of-5 in passing opened up Andalusia’s defense.

Straughn senior receiver Chris Watson had two receptions in the first half for the Tigers.

Andalusia started the second half in slow motion, causing penalties and lost a turnover on its first offensive possession.

The Tigers countered with another fumble recovery of their own, but regrouped with the ball in hand, driving down the field.

“They have a great football team,” SHS head football coach Trent Taylor said. “They really do.”

Taylor said a reason why his team’s offense couldn’t get anything going was because of Andalusia’s speed.

“They’re really quick on defense,” he said. “That had a lot to do with that tonight.”

Straughn turned it over on downs, and Andalusia took the ball the rest of the third quarter.

The Bulldogs completed the offensive drive when Ralph Sims, who led Andalusia in rushing with 89 yards on seven carries, scored from 29 yards out, dodging and weaving through Straughn’s defense. The PAT was good, and Andalusia led 37-0.

SHS got on board with a 27-yard field goal by Chase Short.

For the final 7:40 of the game, Andalusia ran the clock out and at the tail end with a 1st-and-goal, the Bulldogs kneed the rest of the downs to drain the clock.

“We had a chance at the end to get another one (touchdown),” Seymore said. “But, we felt like the game had been done. Coach Taylor is a great coach. Straughn has a young team, but they’ll be back.”

Andalusia’s Daniel Henderson led the Bulldogs with nine tackles, and Montell Lee had six tackles and a sack.