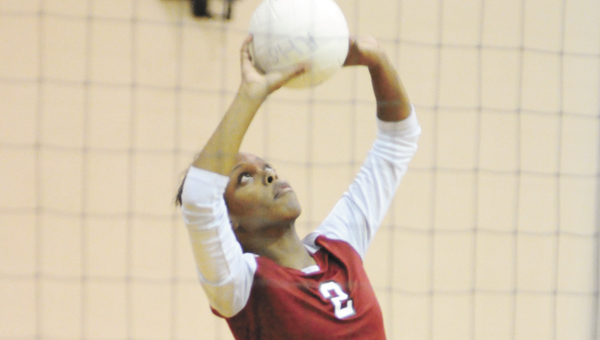 Andalusia and Straughn will compete for the Class 4A, Area 3 title today at AHS.

The Lady Bulldogs will play Ashford, and the Lady Tigers will play Headland in the semifinals of the single-elimination tournament, which is set to begin at 3 p.m.

AHS head volleyball coach Angie Grimes said her girls must “run their offense” today in order to be successful.

“I told the girls that by the time you get to this level of play, you start trying to think about tomorrow,” she said. “You can’t be one dimensional. We’ve got to be able to work on fundamentals and do what we need to do.”

“You’ve got to worry about your first match first,” Tracy said. “You can’t look ahead, or worry about if you win this.

Last season, the Lady Tigers had a 2-0 lead over Ashford in the area semifinals, but the Lady Yellow Jackets won the next three games to end Straughn’s season.

Tracy said he’s been telling the girls to play their “best.”

“I’ve been telling them to give their best effort, and play as hard as you can,” he said. “When you get to this point, you’ve got to play like there’s not another game. It’s crunch time.”

Grimes and Tracy said they added a few new things during practice in the lead-up to today’s area tournament.

“It’s just trying to stay consistent,” Grimes said of the keys for today. “Not losing momentum and going out strong and finishing strong.

“We tend to want to not play our game and volley over the net,” she said. “I tell the girls, ‘you control the game and don’t let the game control you.’ If we can get that, then we’ll be OK.”

The winner and runner-up from the area tournament advance to play in the regional tournament, which is this Sat., Oct. 15.

The finals of the area tournament will begin around 4:30 p.m.