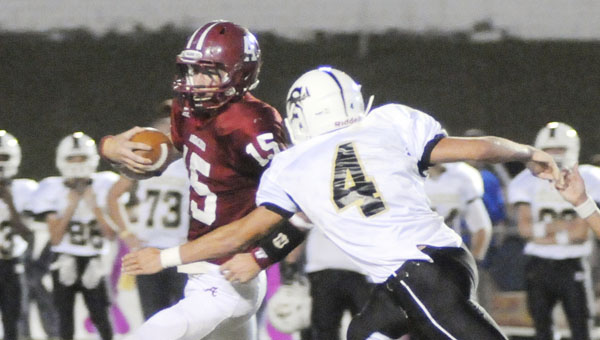 It also hasn’t been on who the Bulldogs could face in the playoffs.

Andalusia’s focus has been on Ashford, and what tonight’s region contest against the Yellow Jackets means in the grand scope of who can win the Class 4A, Region 2 title.

The Bulldogs are a spotless 7-0 overall, and 5-0 in the region, while Ashford is running on a 5-2 overall, and 3-2 region record. Ashford’s two losses came against St. James in an overtime decider, and against Headland last week, who Andalusia will finish its region schedule with next week.

“Our biggest goal is to get them defensively,” Bulldogs head coach Brian Seymore said. “Last year, we played a game of catch up with them. We got behind by 14 points early, and we tried to speed the game up as much as we could.”

Additionally, Andalusia will have its senior night festivities, where every senior on the team will be recognized.

During last year’s game, Andalusia’s Deion Akins, then a junior, connected with former stand out Derrick King on a fourth-and-11 pass that set up a late Bulldog go-ahead touchdown. Andalusia ended up winning the game 21-20.

Seymore said he doesn’t want what happened last year to creep up on the team this year.

“This year, we need to set the tone early on offense and defense,” he said.

Much like Andalusia, Ashford likes to run the ball with the help of senior running back Ladavion Williams, who has rushed for 1,045 yards on 114 carries and scored 13 touchdowns for the Yellow Jackets this season.

Seymore said Williams isn’t a big kid, but can be “slippery” and make defenders miss.

“He’s a very elusive player,” he said. “We’ve got to do a great job of keeping him wrapped up. He has the big-play ability.”

Seymore said the Yellow Jackets employ a “double-wing” formation, where there are two tight ends on the right and left side, along with two wings on the outside to get the ball going in short spurts.

Andalusia saw a similar offensive formation when it played Carroll-Ozark in week one, Seymore said.

“By doing that, they can control the clock, and keep your offense off the field,” he said. “I think that’s the beauty of the double wing.

“It’s tough,” he said. “There will be a lot of guys pulling our guys down and a lot of guys kicking other guys out. It’s a very physical, down hill running attack.”

For Andalusia on offense, Seymore said he hopes to give many players touches throughout the night.

Defensively, Ashford has Aaron Daughtery and Deon Jenkins, who have 80 and 75 tackles, respectively.

Seymore said the Bulldogs are lucky because of the front four on the offensive line.

But, when it comes down to it, Seymore said the fundamentals are still important in this game.

“We’ve got to be able to go out there and execute on both sides of the ball, have a good night in special teams and make sure we have good coverage and capitalize on extra points,” Seymore said. “The rest comes down to blocking and tackling. I know that sounds very fundamental, but that’s what we’ve got to do to be successful (tonight).”

Kick off tonight in Andalusia is at 7.

Lakelyus “Fathead” Adams suffered a rib injury during last week’s game against Straughn. Seymore said Adams has been at practice and has dressed out in a no-contact jersey.

Bobcats, Yellow Jackets to square off

Opp’s T.J. Register looks for a pass during the Pike County game. | Josh Dutton/For the Star-News Opp and Abbeville are... read more