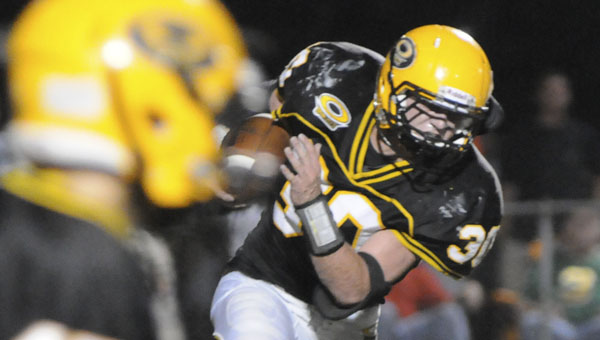 Opp's Trey Short ran a 36-yard play that essentially put the game out of reach for Abbeville. | Andrew Garner/Star-News

“It’s been a long time coming,” Whigham said. “The kids bought into what we told them.”

The Bobcats trailed 20-6 at one point during the contest, but Whigham said a big key was how his team responded to being down by two touchdowns.

“We stayed in control, and that’s what you like to see as a coach — the kids being able to do what you told them to do and they did,” he said.

Opp trailed 20-14 at half time, and went ahead with 1:05 left in the third quarter when Onterrio Jones scored from 5 yards, to tie it and Devin Davis ran in the 2-point conversion.

Opp’s Trey Short put the game out of reach for the Yellow Jackets, rushing 36 yards to the Abbeville 13-yard line to the clock out.

Short led the Bobcats with 148 yards on 10 carries.

Opp held on late, and from there, and ran the clock out to victory.

Myeke Boyd and Onterrio Jones added one touchdown each to pace the Bobcats.

Whigham said the fan-base that showed up Friday night was a big part of the win.

“We had great fan support,” he said. “We had more fans than they did. It was a great night for a high school football game.”

Opp will travel to Slocomb next week in its last region contest of the regular season.