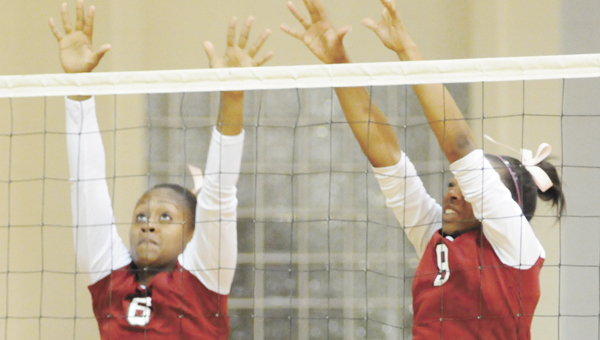 Andalusia’s Omarria McGee (6) and Shambrieka Burnett (9) jump up for a block during the quarterfinals match against W.S. Neal on Saturday. | Andrew Garner/Star-News

Despite a semifinals loss to UMS-Wright in the Class 4A, Regional A tournament on Saturday, Andalusia head volleyball coach Angie Grimes said she couldn’t be any happier with the way the girls played.

“I just keep going back and I keep telling the girls that the first two games against UMS-Wright, ‘Oh my goodness,’ they looked so good,” Grimes said. “It just came down to a couple of points. Going back, we know exactly where we messed up. I was trying to get them to hit through the blocks, and they were.”

With the loss to UMS-Wright, Andalusia dropped down to the consolation match, where the Lady Bulldogs beat Monroe County 3-0 (25-19, 25-19, 25-20) to finish the tournament in third place.

Andalusia began the day with a 3-0 victory over W.S. Neal in the quarterfinals to secure a berth in the Class 4A sub-state round this Thursday.

The Lady Bulldogs will travel to play Regional B runner up Calera.

Straughn’s season came to an end as the Lady Tigers fell to Monroe County 3-2 in the quarterfinals. The Lady Tigers ended their season 8-10.

The story was the same at the beginning of the first two games between AHS and UMS.

Both teams traded back and forth points, keeping the game close.

During the first two games, Andalusia trailed at the mid-point, but came back late and took a lead at one point.

“I think they are a very disciplined team, and a smart team,” Grimes said about UMS-Wright. “They always have been. If you look back, if six or seven of those hits had landed in — a lot of times just inches — that game could’ve been a whole lot different. I think the girls realized that, too.”

Edmondson had 22 assists, McGee had two aces, Townsend had five kills and five blocks, and Daniels had four kills and four blocks.

Daniels and Townsend combined for 31 kills to help lead the Lady Bulldogs over W.S. Neal.

In game two, W.S. Neal came back with a punch, going on a 6-0 run late to force an Andalusia time out.

After the time out, W.S. Neal scored one point, but Andalusia took it the rest of the way to win 25-22.

In game three, both teams were close at the start. The Lady Bulldogs pulled away to take leads of 17-11, 20-14 to put the game out of reach for W.S. Neal. 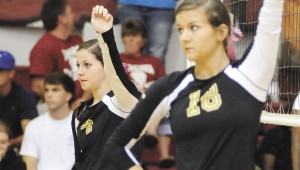 Straughn showed some life and the belief it could be able to advance in the post season, but couldn’t close it out as Monroe County proved to be too much for the Lady Tigers.

“We’ve talked all season about closing matches, and that’s something we’ve not been real good at, even matches that we’ve won,” SHS volleyball coach Marc Tracy said. “We still kind of haven’t closed real well. It falls on me with the preparation — it’s on me.”

With a 2-1 match lead and late in the fourth game, SHS had one match point to close it out.