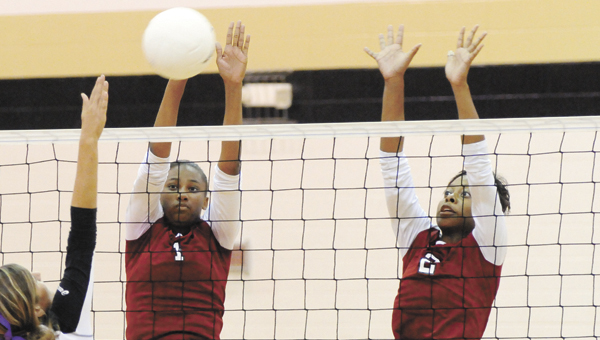 Sometimes the volleyball isn’t set where it’s supposed to be.

Townsend and Daniels, who are both middle and outside hitters for the Lady Bulldogs will try and help lead their team to another state tournament appearance on Thursday when AHS will play Calera in the Class 4A sub-state round.

This season, both seniors, who have played on the same volleyball team since the seventh grade, lead the Lady Bulldogs in kills.

This summer, Middle Tennessee State University held a camp at AHS, where both the varsity and junior varsity squads received instruction on hitting and passing techniques.

For Daniels, playing volleyball came “naturally” for her when she started playing the sport in the seventh grade.

“I wasn’t real good, but as we practiced more, my hits started getting harder and they started going over more,” Daniels said. “I’m athletic, so it came naturally.”

With Daniels wearing the No. 1 jersey, and Townsend the No. 2 jersey, communication between the two is a big part of each match, both said.

“The only time when she’s (Daniels) is at the net and the ball’s coming and I can tell it’s going to be over — I’ll call her name,” Townsend said.

Daniels and Townsend will use communication and their timing for powerful kills in tomorrow’s sub-state round at Calera.

“I think we can beat them,” Daniels said. “We went to Jemison two years in a row, and they were pretty good. We beat them and went to state. ”

Last season, the Lady Bulldogs came back from a 2-0 deficit to Jemison and won the next three games to earn a berth at the Elite 8 State Tournament.

Daniels and Townsend have been on an Andalusia volleyball team that has advanced to the state tournament since they became a part of the squad.

This year is no different because all of the front line except for two players are seniors, Townsend said.

“I feel like we have a different attitude toward it,” she said. “We kind of have a grin on our shoulders that we have what we have. We’ve been to state every year that we’ve been over here.”

Townsend and Daniels said they’ve heard how good Calera is on the volleyball court.

But one thing that separates their team from Calera is that the Lady Bulldogs think they’re good, too.

“There have been a lot of games that we’ve shown we can play with some of the toughest teams,” Townsend said. “It’s not like we know we’re going to win, it’s just that we have the mentality that we’re going to play our game and pull it out.”

One key to Andalusia’s success has been the crowd support, the seniors said.

“We want people to come,” Daniels said. “We just don’t want the volleyball team to be there. We want fans, and people to show up.”

The sub-state round match in Calera will begin at 2 p.m. tomorrow.