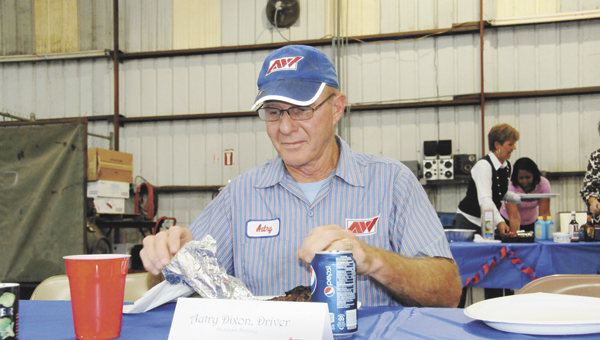 Autry Dixon, who has been a driver for Allied Waste for the last 12 years, unwraps his baked potato at Thursday’s luncheon.

Employees were rewarded for the “fruits of their labors” with a steak lunch at headquarters in Andalusia.

AW operations manager Jeff Lynch said the trucks have driven more than a million miles without an accident.

The 7,000 customers include residential and commercial, Lynch said.

Lynch said the last time an accident occurred was on Oct. 13, 2009, when a truck knocked over a mail box.

“It doesn’t matter what it is, an accident is an accident,” he said. “We’re very sensitive to safety.”

Lynch said the company prides itself in being safe.

“We’ve worked very hard with the county, cities and utilities to make sure that we don’t have issues as far as low-hanging power lines, trees, roads that are washing out,” Lynch said. “Safety is our first priority.”

Tickets are on sale now for the Luncheon Pilot Club of Andalusia’s annual Christmas Tour of Homes. This is the... read more