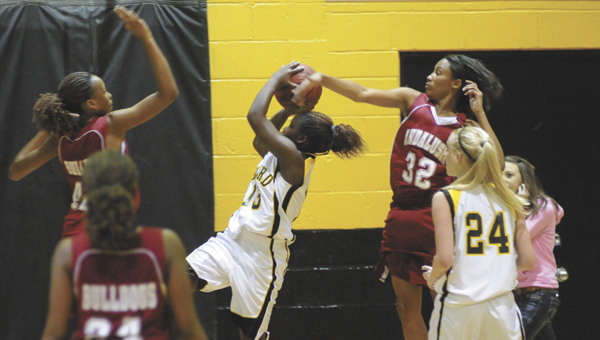 ASHFORD — Three of Andalusia’s starters fouled out in the second half, but the Lady Bulldogs held on late to beat Ashford 60-50 in area action on Friday night.

Andalusia’s Tyleshia Malcolm, Shi’Amber Townsend and Alexis Horton accounted for 15 of the team’s 25 total fouls, compared to Ashford’s 15. The Lady Bulldogs played eight different players on the floor in the win.

“It’s hard to play a ball game when you’ve got 25-8 in fouls,” AHS coach Bennie Shellhouse said. “I thought the Ashford girls played real hard. I really did. They did a good job of taking the ball to the rim.”

With this victory, the Lady Bulldogs clinched the area, and the right to host the area tournament, which begins Feb. 6.

Throughout the contest, the teams battered back and forth with each other, not allowing for one team to dominate the other.

The Lady Bulldogs went ahead 52-39 on a bounce pass from Horton to Townsend with less than four minutes remaining.

The Lady Yellow Jackets made it a contest, cutting into Andalusia’s lead at 53-46 with 2:01 to go. Ashford made two free throws on Horton’s fifth foul.

However, the Lady Bulldogs strength and experience won out and Andalusia sealed the win on a 4-0 run when Alectricia Barnes passed to Townsend for two, and two free throws from Barnes.

Andalusia led 30-22 at half time, and took a 40-29 lead on another assists from Townsend to Barnes.

AHS led 23-14 after a steal and the back-end of a free throw shot from Barnes in the second period.

Andalusia will play host to Headland on Tuesday in its last regular season area contest.

The December jobless rate in Covington County – and the state – is down, statistics from the state Department of... read more