Saints get split in weekend series 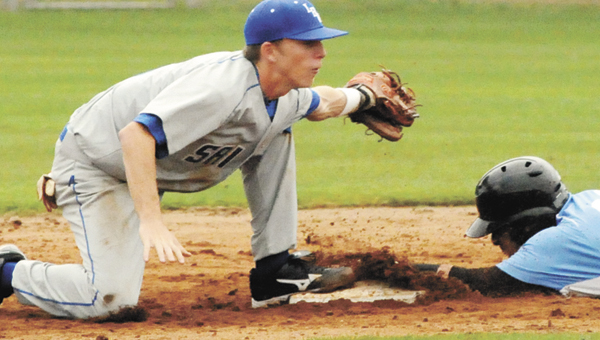 LBWCC ended its T.J. Fleming Invitational tournament with a 12-2 loss to Alabama Southern on Sunday afternoon.

The Saints entered the final day of the tournament 2-1, after defeating Marion Military Institute 10-3 at the mid-way point.

LBWCC falls to 2-2 on the season, and will play John A. Logan College this Saturday.

Alabama Southern shot out to a 3-0 lead in the second inning and scored eight runs the fourth inning to force the mercy rule over the Saints.

LBWCC cut the Eagles’ 3-0 lead in the second inning when it scored two runs.

David Carter got the only hit for the Saints against Alabama Southern with two trips to the plate. Carter added one run, and Zach Sasser scored the other run.

The Saints scored four runs each in the third and fifth innings in the win over Marion Military.

Andrew Crane was 2-for-2 with three RBIs; and Chad Dickinson and Ben Pettus had two RBIs each for the Saints.

P.J. Leto scored two runs and was 2-for-3 behind the plate for LBWCC.

Thomas Dorminy had two strike outs and allowed one run on one hit in 3.1 innings of work.