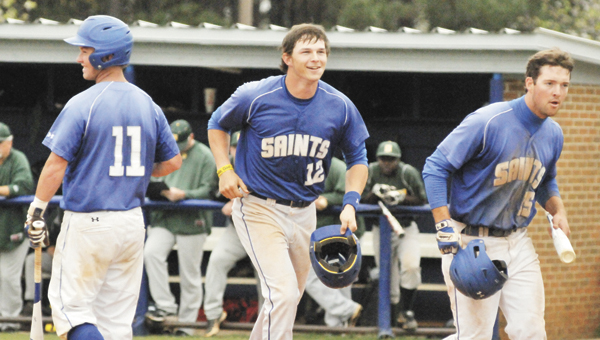 LBWCC’s baseball team has played through adversity with a competitive attitude as the Saints are riding a 16-game win streak leading into this weekend’s conference road series at Faulkner State Community College in Bay Minette.

The Saints are sitting a 30-7 overall, and 18-3 in the ACCC South. They clinched a playoff berth last weekend in series at Jefferson Davis in Brewton.

In fact, the Saints need to win two conference games out of the last nine to secure a No. 2 seed.

Helms said the team is treating this weekend’s series against the Sun Chiefs like any other.

“We’re not putting all of our marbles (in this series),” he said. “It’s another series. Now we’ve clinched, we’re going to start preparing for the (state) tournament.”

Leading into this season, the Saints had to start facing adversity early.

LBWCC lost pitcher Raymond Moody at the start of the season due to an arm injury. The Saints’ No. 1 pitcher, Thomas Dorminy, broke his hand mid-way through the season; and Clark Gray is out with an arm injury.

“I’m so proud of them,” Helms said. “We’ve overcome a lot of adversity with the injuries we’ve had.”

When asked what it’s taken to win so many close games this year, Helms said it’s the team’s “competitive nature.”

“We preach from day one togetherness and toughness,” the coach said. “Those two things have carried us at this time. We may not win another one, but I’m proud of this group.”

Helms said he can’t describe how his team has amassed 30 wins this season. The Saints had 30 wins last year, too.

“We’ve won a lot of close games because, to me, we’ve got a team,” he said. “We’re unselfish. It’s been fun to watch and to be a part of.

“Most (visiting) coaches say when they leave that we go after it,” he said. “The guys have bought in. (LBWCC assistant) Coach (Brandon) Ware’s spent a lot of time with our defense. Our defense has been amazing with our double plays. We’re enjoying it and working hard and looking forward to it (the state tournament).”

The ACCC state tournament starts on Sat., May 11, and lasts for a week.

Straughn’s Kristen Peavey hits a double in the first inning Tuesday night. | Andrew Garner/Star-News When one is in a... read more