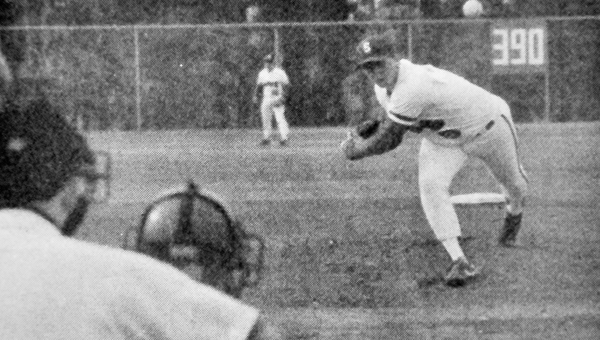 LBWCC’s Brian McCranie, of the Saints’ 1988 baseball team, throws a pitch during the season 25 years ago. |
Fil photo

During a 30-minute rain delay 25 years ago, former LBWCC baseball coach Mark Hogan told John Cook that he would hit a two-run double off the fence that would propel the Saints to win the 1988 Alabama Community College Conference state championship.

Cook, instead, laced a double down the left-field line that scored two runs, and the Saints took advantage of some miscues by the opposing team to get the championship win.

Around seven to eight former LBWCC baseball players from the 1988 state championship team will gather for a reunion on Saturday at Crum Foshee Field in Andalusia.

Ates, who played on the ’88 team, said the reunion idea came about at his father, Luther’s, funeral last July.

“When a bunch of guys heard about (my father’s passing) — they were great — they called me with condolences for the family,” Ates said. “The players, a lot of people, remembered my dad.

“A bunch of the guys got together and we were like look, we need to all get back together, as many of us as we can,” he said.

Ates, an assistant principal at Eufaula High School, and a former baseball coach said he’d take the charge to get the group together for the reunion.

So, he did what most people would do today, and started looking on Facebook.

“I’ve been a teacher long enough and I know the kids,” Ates said. “Facebook was the way to go.

“We started Facebooking,” he said. “Many of us have been keeping in touch with three or four guys over the years.”

Groups of players from the Ft. Walton, Pensacola and Defuniak Springs, Florida, areas were contacted about the reunion, Ates said.

Ates said the bunch of players he played with were a close-knit group.

“We had a great group of guys, though,” he said. “We just had a lot of character among the guys that I played with.

“When my dad died, some of us hadn’t seen each other in 15 or 20 years,” he said. “My father passed away, and then I look up and here are my former teammates at my father’s funeral.”

Tomorrow night, the small group of players will meet at the Days Inn conference room at around 5:30 to catch up and reminisce about the old playing days.

The 1988 baseball team will be recognized at 11 a.m. on Saturday, one hour prior to LBWCC’s conference doubleheader start against Alabama Southern.

Andalusia senior golfer Hunter Dendy hit his practice shot straight on in between the 175 to 200-yard marker on Tuesday... read more