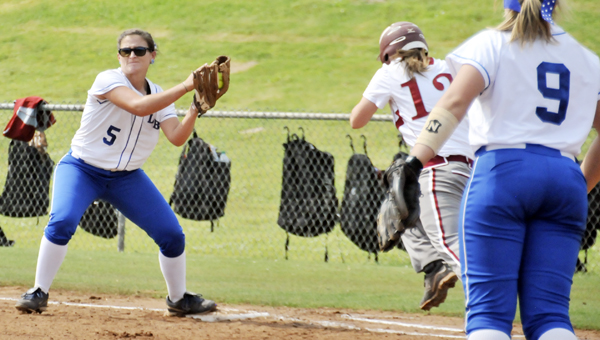 LBWCC’s Tiffany Taylor receives a throw at first base during an earlier contest this season. | File photo

LBWCC’s Lady Saints are looking to make a good showing this weekend at the Alabama Community College Conference State Tournament at Veteran’s Park in Alabaster.

The Lady Saints enter the three-day tournament that starts tomorrow, as the No. 4 seed from the South Division. They’ll play Enterprise State Community College in the first round of the double elimination tournament.

LBWCC softball coach Candace Tucker said the girls are excited about the opportunity.

“The goal is to go up there and make a good showing,” Tucker said. “We’d love to beat Enterprise.

“We haven’t beat them during the regular season,” she said. “We’d love to be able to go up there and do that. Now would be the time.”

There’s a definite change in how the girls are hitting from the last time they saw ESCC, Tucker said.

“I think it’ll be a different story,” she sad.

Game time tomorrow is at 10 a.m. If the Lady Saints beat the Weevil Nation, then they’ll turn right around and play the North Division’s top seed, Wallace of Hanceville at noon.

“It’ll be a good day if we can play ball like we can,” Tucker said.

LBWCC showed that they can play a good ball game in its final regular-season conference series against Alabama Southern.

The Lady Saints lost both games by one run (4-3, 8-7) because of walk-off hits with two outs in the last inning, the coach said.

One thing Tucker said what the girls took away from their two losses to ASCC is the importance of finishing games.

“Anytime that happens, it’s real tough,” Tucker said about the walk-off hits. “The biggest thing is finishing the whole game and knowing that no matter how many points you’re up, you’ve got to continue to play.”

LBWCC will pack up and head out today around lunch time to make it for the ACCC’s annual banquet, where former international softball player Dot Richardson will speak.

Smiles were all around Tuesday

When I pulled off of Stanley Avenue and pulled into Johnson Park’s parking lot Tuesday evening, I didn’t know what... read more