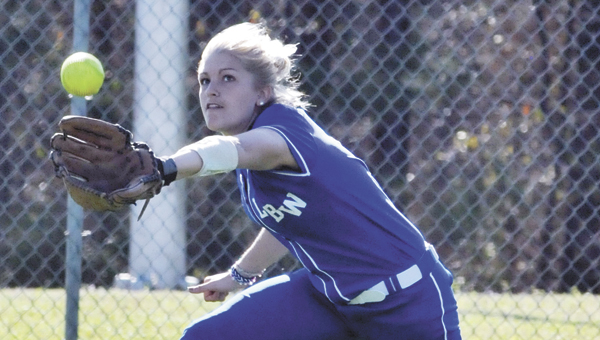 The Lady Saints bounced back from a gut wrenching loss to ESCC to beat Chattahoochee Valley 2-0 in the ACCC state tourney on Friday in Alabaster.

LBWCC pitchers and Andalusia natives Kaitlynn Wiggins and Katy Messick earned a win on the mound in the must-win contest.

“It was just one of those things they found a way to (beat Chattahoochee),” LBWCC coach Candace Tucker said. “We didn’t really just crush the ball in the second game. We hit when we needed to.”

A key hit came from Pensacola, Fla., native Crysta Paulson, who launched a solo home run to give LBWCC a 1-0 advantage.

“That helped give us a boost,” Tucker said of Paulson’s home run. “It wasn’t a pretty game hitting as we’ve had. We found a way, and had some good defensive plays also.”

The Lady Saints took advantage of Chattahoochee’s inability to get anything going in the game, and scored another run later in the game to seal the win.

Leading 4-2 in the seventh inning, the Lady Saints gave up three runs to ESCC and fell 5-4 in the opener.

In their first-game loss, Tucker said ESCC hit the ball and found the needed holes in the field.

“There wasn’t much we could do to stop it,” she said.

LBWCC plays again today at 10 a.m. in the second round of the loser’s bracket.

The Lady Saints play the winner of the ESCC-Central Alabama game, which got caught in a rain delay yesterday with ESCC leading 4-2.

Both teams will finish their game today.

Straughn’s Brooks Rabren and the rest of the Tigers feel they have a good chance to secure a state tournament... read more