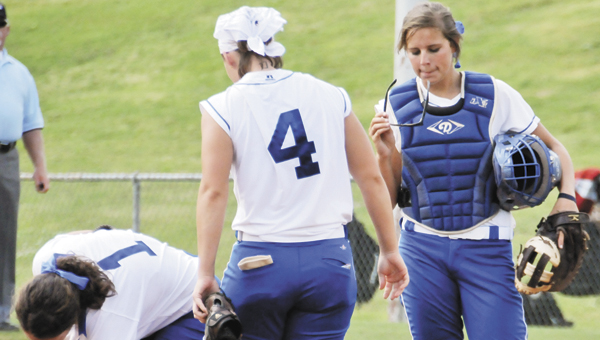 LBWCC’s Katy Messick (1), Courtnee Meyers (4) and A.C. Riley meet at the mound during an earlier game this season. | Andrew Garner/Star-News

The Lady Saints ended their season on a high note at the Alabama Community College Conference state tournament on Sunday in Alabaster.

LBWCC beat Enterprise State Community College 5-2 for its first win over the Weevil Nation before falling 7-0 to Southern Union later in the bottom bracket.

“It was great,” Tucker said. “It was worth the trip up there just for that. For them to beat us so many times during the regular season, it was nice to finally win one against them.”

All three of LBWCC’s pitchers — Kaitlynn Wiggins, Katy Messick and Courtnee Meyers — threw for the Lady Saints in the win over ESCC.

Tiffany Taylor laced a two-run double in the fifth inning to put the Lady Saints ahead 3-2 after they were trailing 2-1.

Meyers hit an RBI double in the second to give LBWCC its first run of the game. Beth Anne Spurlin went 2-for-3 to lead the Lady Saints.

LBWCC’s win over the Weevil Nation came after a full day of no games on Saturday.

In the Lady Saints’ loss to Southern Union, Tucker said the score wasn’t indicative of how the girls played.

Tucker said the Lady Saints had their chances to score during the contest, leading off every inning with a single to put a runner on base.

“We couldn’t get anybody batted around,” she said.

The Lady Saints finished their season 10-37.

Tucker said she told the girls after the Southern Union loss that while it wasn’t a successful season overall, they did improve. Additionally, LBWCC was the second to last team from its conference to leave the tournament.

“We hit better I felt like as the season went along,” she said. “The defense went a long way. We went from committing two to three errors or more per game to way less than that. I thought we wended on high note.”