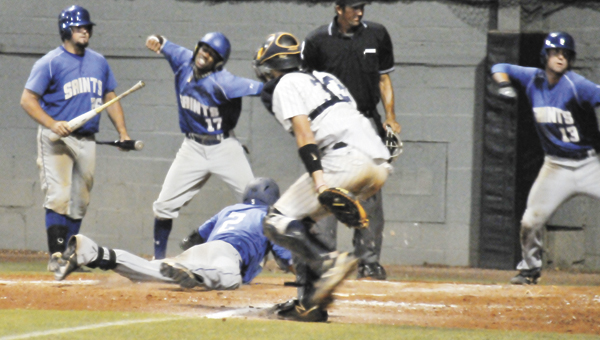 OZARK — LBWCC coach Steve Helms said Wednesday night’s game against Southern Union was one of his proudest moments as the Saints’ coach.

The Saints fell 12-5 to a good Bison baseball team in the loser’s bracket finals of the Alabama Community College Conference State Tournament at Eagles Stadium in Ozark.

SU led 2-0 after the first inning, but LBWCC answered with two runs in the bottom half of the second to tie the game at 2-all.

To help pump the team up, Helms argued a call in the top of the third inning, from which he was thrown out of the ball game.

From there, the Bison scored three runs to take a 5-2 lead after the third inning.

LBWCC cut the game to one run in the bottom of the fifth on a two-run triple from Trevor Maxey. Maxey later scored on an error to put the game at 6-5.

SU added two runs each in the top of the seventh, eighth and ninth innings to pull away with the win.

“That scoreboard does not reveal character,” Helms said. “That dugout revealed character.

“They played up until the last pitch,” he said. “They gave me everything they got. I’ve been blessed with a lot of things. That was one of my proudest moments was to coach this team.”

The Saints defeated Wallace State-Dothan 11-1 earlier Wednesday to get to the bottom bracket’s championship game.

“In the first game (Wednesday), we were cramping,” Helms said. “We had probably five or six kids cramping in the dugout.

“That just tells you how much effort they’ve been giving,” he said. “We played a good Southern Union team. Six games in five days is hard, especially at the level we play at.”

The Saints scored their two runs in the bottom of the second inning after leading off with two singles.

Southern Union took a 3-2 lead in the top of the third inning on an RBI double from Randy Loew. After a throwing error, the Bison led 4-2 with no outs.

LBW caught a Southern Union runner in a run down between home and third base, where Helms said he saw the Bison runner kick his infielder. Helms argued the call and was then ejected from the game.

Later in the third inning, Sumner McWhorter hit an RBI single to make it 5-2. Loew added another RBI in the fourth that made it 6-2.

In the fifth inning, LBWCC’s Connor Pinegar and Brandon Pugh hit singles to put runners on second and third.

After Trey Chambers hit a flyout, Maxey drilled his shot to right, where it dropped to score two runs. Maxey scored on the throwing error later.