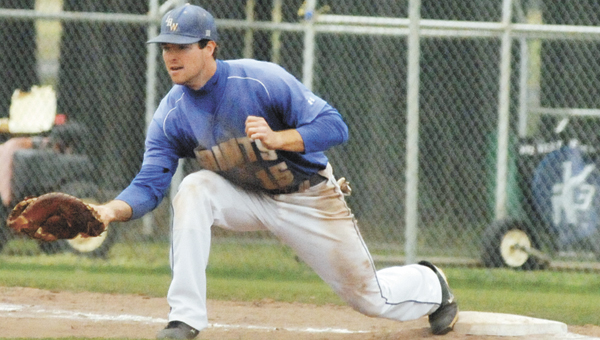 LBWCC first baseman Ryan Barnes was named as the Southern Division Player of the Year for the 2013 season. | Andrew Garner/Star-News

Ryan Barnes couldn’t have done anything without his teammates this season.

The LBWCC sophomore and Huntsville native was named the Southern Division Player of the Year by the Alabama Community College Conference. Barnes was chosen from other players in the southern division.

“It feels great,” Barnes said about winning the honor. “I got to give thanks to all my teammates. I wasn’t the only one out there. I had a lot of guys back me up.

Barnes led the Saints with a .404 batting average. His on-base percentage was .462, and his slugging percentage topped at .570 to lead the team.

The Saints’ first baseman grew up in Huntsville and has played baseball since he was 5 or 6 years old. Barnes started playing serious baseball in middle school, then moved to travel ball for some time before playing for Class 6A Huntsville High School for four years.

After his freshman year, Barnes said he wanted to focus on baseball.

“I was playing football also at the time,” he said about his freshman year. “I kind of just realized that I like baseball a whole lot more. I decided to focus on it from there.”

Like Barnes, Helms gave all the credit for the award to the players.

“The coach of the year award is not a reflection of you, it’s of your players,” Helms said.

Helms added that Barnes was a worthy recipient of his award.

“He had an outstanding year,” Helms said. “We’re very proud of him.”

Barnes also was named to the All-Region 22 second team and All-South first team.

“It’s a great honor for them to get these awards,” Helms said.

In softball, LBWCC’s Kaitlynn Wiggins and Tiffany Taylor, who are Andalusia natives, were named to the All-South second team.

Wiggins finished with a .306 batting average, tallying 37 hits and scoring 21 runs for the Lady Saints.

Barnes said this year was a special one because of the team chemistry that was built as the season progressed.

“Whenever we’ve been down and faced adversity, we’ve been able to fight back and overcome it,” he said.

Getting mentally tough and physically strong in the off season also contributed to the Saints’ success as well, Barnes said.

“It was a great year,” Barnes said. “I want to thank God for it, and my family and teammates and coaches. Without them, I couldn’t have done it.”

Barnes is the son of Chris and Pam Barnes of Huntsville. He has committed to play ball at the University of Alabama at Huntsville.

Marcus Taylor talks to a Rehobeth player during preseason practice in August. Taylor, a former Andalusia coach, was hired as... read more