Mendez: This was a life or death operation 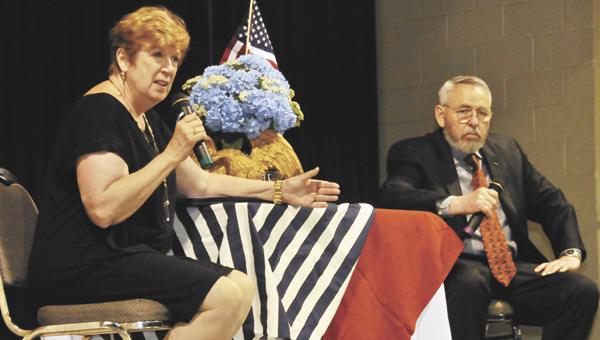 Jonna Mendez (left) and Tony Mendez talk about the exfiltration of the six American diplomats from Iran. |
Andrew Garner/Star-News

Movies are known to be an escape.

On Thursday, attendees at the LBW Community College Foundation dinner heard firsthand from the man responsible for the escape of six American diplomats from the embassy in Iran in 1979, who helped turned the story into a movie.

Tony Mendez, known to the world now as the mastermind of the basis for the movie “Argo,” was the night’s featured speaker. Accompanying him was his wife, Jonna.

The two have more than 50 years of combined experience in the Central Intelligence Agency, both working in espionage.

Mendez specifically spent 25 years as a CIA technical operations officer. In 1979, he devised and oversaw the “Canadian Caper,” a plan to liberate six American diplomats from Iran.

The 2012 movie “Argo,” directed by and starring Ben Affleck, is loosely based on the “Canadian Caper.” Mendez has written three memoirs about his experiences in the CIA.

The 71-year-old retired CIA agent is the man who managed to sneak six U.S. diplomats out of Iran during the 1979-81 hostage crisis by having them pose as a fake crew for a fake movie. Mendez is played by Affleck in the movie about the long-classified operation.

“One of the questions we get the most is how can you tell this story now,” Jonna said. “Tony was told to tell the story. He originally said no. He said it’s a secret, but he was told they wanted the story out to the American public.”

Mendez and his wife took attendees step-by-step through the exfiltration of the six Americans who hid in the Canadian embassy for 86 days.

His wife explained the thought and detail that went into bringing the Americans home.

“This was a life or death operation,” she said. “If they’d gotten caught, they would have been excuted.”

One of the most interesting things discussed was the parallel between working as a CIA exfiltration agent and working in Hollywood.

“It was his job to give false identities, materials and a new disguise to go with it,” Mrs. Mendez said. “It’s called identity transformation. It would involve changing you into who you needed to be to get the job done. We could aways add to what you were. We could make you taller, not shorter; thicker not thinner. If we needed to, we could make another one of you, so there could be two.

Food program fills gap for many