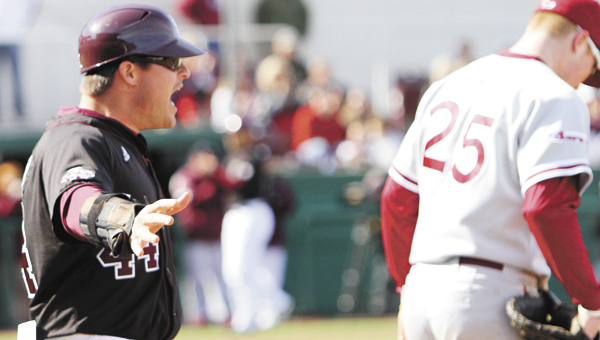 Practice and preparation are what Jake Wells lives for.

Wells, a Devine, Texas native, and former LBWCC Saint, is using what he learned in his one year at the local community college and is putting it in good use this week at the 2013 College Baseball World Series in Omaha, Neb.

Wells is an assistant coach for the Mississippi State Bulldogs, coaching the team’s catcher and hitters. On the field, he coaches at first base.

The Bulldogs have fought through adversity this week at the CWS, narrowly defeating Indiana 5-4 on Monday night to set up a crucial game against Oregon State today at 2 p.m. CST. Oregon State beat Indiana on Wednesday night. MSU needs to win today’s game to advance to the championship series, which starts on Monday.

After playing for the Saints, Wells played at the University of Montevallo and then spent years playing professional baseball in Florida and in the independent league.

“I haven’t been coaching for a long time,” he said by telephone from Omaha on Wednesday. “Everything I got coaching-wise came from (LBWCC) coach (Steve) Helms. I still have the player mentality.

MSU led 5-3 in the bottom of the ninth inning and Indiana pushed a run across on a fielder’s choice with two men on base. Fortunately for MSU, the last out came on a chopper that resulted in the first baseman scooping the ball up on the throw for the tough out.

“These guys fight every day,” Wells said about his Bulldogs, noting that MSU found itself in a two-run hole earlier in the game. “There’s no panic. There’s a calmness that goes through our dugout. When the average fan thinks there’s a tough time, our guys are cool and calm and confident. They just do whatever it takes to get the job done, and they do it right.”

When asked what he thinks Mississippi State’s chances are today, Wells said it’s all determined on how the Bulldogs’ play on the diamond.

“Every team is good and it’s whatever team shows up, and competes and does the little things,” he said. “Everybody, they’re here for a reason (to win the World Series). It could go anybody’s way.

“I feel really good about our club,” he added. “Everybody’s in a good place. We’ve got to do the little things right, and do things the right way like Helms taught (my teammates and I) to do, and hopefully it’s going to turn out on our side.”

While playing games at LBWCC were fun for Wells, getting ready and preparing at practice is what he remembers the most about his time here.

“Playing at LBW was the best college experience I’ve ever had,” he said. “It was the way our practices were ran, what coach Helms did for us. Practice was a time where we worked hard. The hill behind the field was one thing I remember most. (Helms) wears that thing out when you don’t do things the right way. Practices meant everything to him. He’s a guy that hopefully, one day, when I’m a head coach at the Division 1 level, he’s going to follow me and be one of the coaches on staff with me. That’s how much I respect the guy.”