Getting a new nest 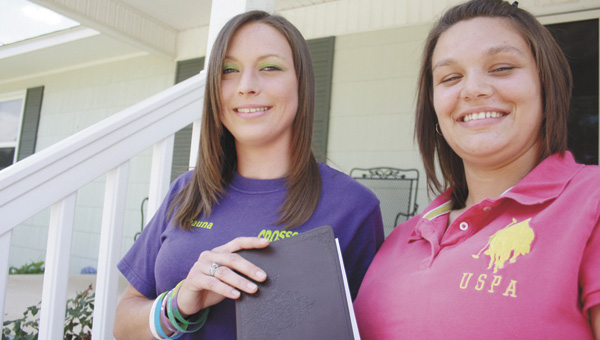 A t Norma’s Nest, it’s all about new beginnings – new for the program recently acquired by Crossover Ministries, and new for the three women currently going through the program.

Called an “after care” program, the Snowden Drive home in Andalusia serves as a transition site for the women of Crossover Ministry, a Christian recovery solution for substance abuse and addiction through the use of education, work, counseling, partnering with churches and the knowledge of Jesus Christ in order to rebuild lives.

The ministry opened its doors in 2005 and is headquartered in Opp.

Norma’s Nest was established in 2011 as a transition home for women released from jail. It’s outfitted with a sleeping space for four women, plus the housemother, a living room area, kitchen, dining room, two baths and a study, complete with two computers. There, the women will get the skills needed to re-enter the world, ranging from financial classes to Bible study and all points in between.

However, the ministry had a difficult time finding a fulltime housemother to over see the program, and that’s where Crossover Ministries entered into the picture this March. The house officially opened for guests in May.

“Now, we have three women living here, and after they complete the eight-month in-house program at Crossover, they come here for four months of after-care,” Sasser said. “And so far, things are going great.”

Saturdays are dedicated to home visits.

“We believe family is a big part of the recovery process,” Sasser said. Incidentally, the Norma’s Nest site is Sasser’s childhood home.

“It’s a perfect place for this work to happen,” she said. “Us being here is God’s plan, I know it.”

Jessica Whitten and Shauna Spears are two of the women currently living in Norma’s Nest.

Whitten said she voluntarily committed herself to the Crossover program after she saw her cousin’s success in the program.

“I realized I needed help when I couldn’t get out of bed without drugs,” Whitten said about her battle with prescription pain pill abuse. She said she became dependant after a back surgery in 2004.

“My use gradually grew to the point where I didn’t care about anyone other than myself,” she said. “This program is more than I thought it would be. It’s built up my self-esteem, and now, I know I can do it. I can stay clean for my daughter’s sake.”

Whitten will graduate from Norma’s Nest on Aug. 31.

A portion of Spears’ battle was documented in a Star-News article that detailed how she was part of an Andalusia couple who were jailed after they were caught in the act of burglarizing a home — the homeowner gave chase in 2011.

“I’ve been in jail a few times,” the 22-year-old said. “I got into trouble doing drugs and alcohol as a teenager and it took control of my life. I would do anything to get high.”

Eventually, Spears found her way to Judge Trippy McGuire, who allowed her to enter the Crossover program.

“I told the judge I knew the only way to deal with my problems would be through God,” she said. “And I wanted to go to Crossover to learn how to do that.”

She entered the program in September 2012 and will graduate in August.

Soon, the women will begin finalizing their plans to leave the “nest,” and both couldn’t be happier.

“I can’t wait,” Spears said. “I dream of being a farmer. Growing my own food. Maybe getting my CDL from MacArthur.”

A River Falls couple is in a slew of trouble after they allegedly went on a seven-day stealing and shopping... read more