Never too young to start work 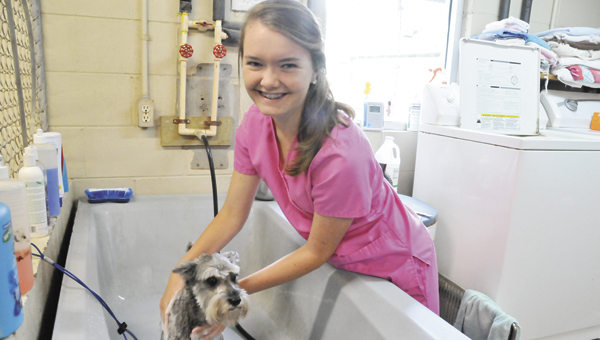 More than 100 area teens have found summer jobs, thanks to summer work programs.

The teens, who are employed with the City of Andalusia and PowerSouth, are being productive this summer by earning spending money and helping to accomplish various tasks.

Deborah Spivey, the city’s human resource manager, said nearly 60 area youth were hired by the city and the city utility board.

“They have been assigned to different departments, and we have several working with the Johnson Park crews on cutting right-of-ways, picking up trash and prepping ball fields for the new season,” Spivey said. “We have several assigned to work at the Adult Activity Center, the library, city hall, the police department, the museum, Springdale and the golf course.”

Spivey said the Will Coleman Enrichment Program is in full swing at the Coleman Center for children ages 5–14, and several are assisting coach Richard Robertson with that program.

“And the horticulture department is making use of a couple to get the summer planting projects completed,” Spivey said. “Several are working with the water/sewer/electric/wastewater crews clearing right-of-ways, painting and organizing warehouse inventory. And of course, we have both the Cooper and Coleman pools open this summer and have numerous swim instructors, lifeguards and pool managers.”

“These students are doing a variety of jobs such as working in our accounting, legal and communications department and in the warehouse and transportation shops,” Ingram said. “We even have some who go out and work with the guys in the substation. They’re not doing tasks, but they can be a helper.”

Ingram said the company uses the program to build interest for future employees.

“We try to align the students in an area that they are interested in, not only to learn something, but we also look at it as a scholarship program. Students get to earn a little money while they’re at home for the summer, and at the same time, it gives them an idea of what it’s like to work in a corporate environment.”

Not all summer jobs are found at big corporations or in municipal government. Sarah Atkinson is working alongside her dad, Dr. Toby, this summer at Andalusia Animal Clinic.

Atkinson said it’s her job to keep the animals clean.

The power of art

Twelve budding artists have had the opportunity to experience the Power of Art this week through a partnership between the... read more