Seriously, did we just do that? 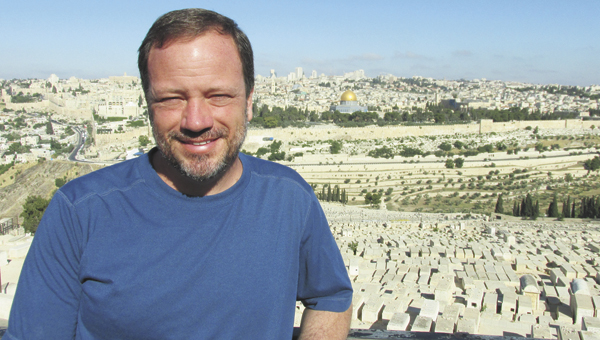 Tom Albritton poses with the city below. | Courtesy photo

Andalusia attorney Tom Albritton recently returned from a trip he considered a luxury.

But it wasn’t a luxury by the world’s standards. No spas serving umbrella drinks and licenses to be lazy.

Instead, Albritton’s “luxury” required an intensive reading list in preparation and three weeks of travel.

He was part of the Middle East Travel Seminar’s 2013 trip to Jordan, Israel and Greece, which included 15 seminarians from diverse universities and five lay participants. Each of the participants was nominated and interviewed before his or her selection.

“It was exciting,” Albritton said in a recent interview. “I was able to learn for the sake of learning, not for any other reason, and that’s something I’ve had the luxury to do in over 20 years.

“It was nothing more than a gift to be able to learn from people who knew the region so thoroughly that they were able to condense it in an understandable and memorable way to people from varying backgrounds.”

Max Miller, a former Emory professor and archeologist who has participated in many excavations in the Holy Lands, led the annual excursion, which he founded in 1980.

The trip began with a two-day orientation in Atlanta in which the group reviewed the reading materials and participated in a discussion of the current political situation in the Middle East.

From Atlanta, the group flew from Washington, D.C., then to Vienna, and finally to Aman, Jordan.

“We stayed in Aman for three days, and took day trips,” Albritton said. “We were in Jordan a total of 10 days, traveling from north to south, and stopping at sites all along the way.”

The group crossed over from Aqaba, Jordan, into Israel for another 10 days, traveling from south to north.

“We went through the West Bank and the Golan Heights and were in Jerusalem for five days.”

The group then drove from Jerusalam to Jaffa, and went from Jaffa to Athens, Greece, for two days before flying home.

Asked to pinpoint the best parts of his trip, Albritton, who is known for planning learning adventures for his family, said, “You never outgrow big fun.”

In the Wadi Rum region of Jordan, the group spent the night with the Bedouins in the desert.

“Wadi,” is the Arabic word for valley, he explained.

“This really looked similar to American west, but it was very much desert,” he said, adding that the area was a trading route between Saudi Arabia and Jordan often used by camel caravans.

“It is a traditional area where the Bedouins still live,” he said.

The Bedouin hosts greeted the group with tea around the fire area of the camp. They were fed a meal cooked in the ground.

“It was the same kind of social atmosphere as when people you know cooked pig in a ground,” he said.

The travelers slept in tents in the desert and rode camels.

“It was as much fun as you think it would be,” Albritton said. “It’s one of those kinds of experiences when you fully recognize you’re not home any more.”

Aside from “big fun,” two things really stood out for him.

“One day I was by myself, swimming in the Sea of Galilee,” he said. “From that vantage point, I could see from Tiberias to Capernaum. At that point, I recognized how geographically small the area was tha the Bible says Jesus preached in.

“It just doesn’t feel that different from what any rural citizen would know about the towns he or she lives in. It put that part of the scripture in geographical context for me, and brought home how simple the beginnings of the faith were.”

It would be, he said, as if someone walked from Georgiana to Andalusia and delivered a message that people were still talking about 2,000 years later.

The second thing, he said, would be in the old city in Jerusalem.

“What was striking to me about that was the way so many cultures are able to coexist literally on top of each other with an amazing degree of stability,” he said. “It appears that that occurs a lot more than the instability you hear so much about.

“In the old city in Jerusalem, where you still go to buy your stuff – from socksto groceries – Arabs and Christians and Jews are all living side by side. Add tourists on top of that and it is a probably the most dynamic place that I’ve ever seen.”

Traveling with Miller, the founder, also gave the group insight that many tourists don’t get. There are many sights that are generally recognized as the location of historic events, mainly because they have been accepted as holy sights for a long time.

But there are others, he said, where more is known.

“In Nazareth there’s one well,” he said. “Our leader could say, ‘This well has been here more than 2,000 years. If you believe the holy family lived in Nazareth, it is the well they would have used.’ ”

Another example is that in traveling from Nazareth to Galilee, the same trail has been there since the first century.

“ If Jesus walked from Nazareth to Galilee, he would have used that trail,” Albritton explained.

Despite the unrest in the region, he said he never felt unsafe.

For example, the Church of Holy Sepulchre, which is among the holies of sights to Christians, is managed by a Muslim family, and has been since the Ottoman Empire.

“They put (the Muslims) in charge because they couldn’t trust Christians (to not fight over it),” he explained “The group still comes in and unlocks the door. It works very well.”

He described obvious points of contention in the old city, where there is a Jewish settlement on top of an area largely inhabited by Arabs.

“Then you see Jewish children and Arab children running in streets together, and you realize what’s at stake and you want everybody to have safe place to live over there,” he said. “There’s a lot they have already figured out, doing very well.”

Overall, he describes the trip as a “once in a lifetime opportunity,” and said it made him want to visit the area again as soon as he has the opportunity.

A fleet of armed policemen stood guard Friday as the Okaloosa County, Fla., man charged with the attempted murder of... read more