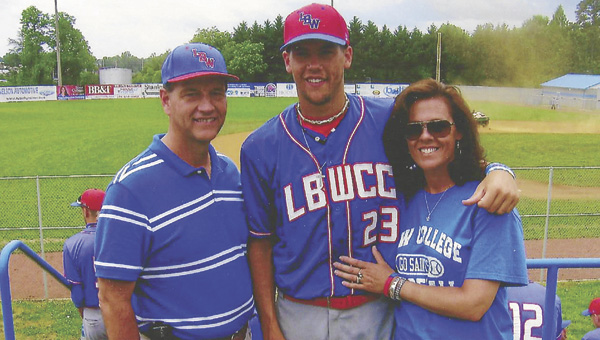 Butch Youmans, his son, Spencer, and dad, Ferris Youmans Jr., pose for a photo while Spencer was an Opp Bobcat. |
Courtesy photo

If there was one place on this earth that Butch Youmans would have been the fourth weekend of June, it would’ve been at the Opp Sports Complex as scores of young all stars fought it out for the state title.

But God had other plans for the 53-year-old Opp businessman and avid sports fan who died on May 25 from an 18-month battle with pancreatic cancer.

It was standing room only at Wyatt Funeral Home and Chapel as mourners came to pay their respects to the man who created one of Opp’s largest employers – H.B. Paulk Grocery Company.

Born as Ferris Paulk Youmans, he was known to the community simply as “Butch,” dubbed so at birth when his father Ferris Youmans Jr., owner of a Piggly Wiggly, claimed he needed a butcher to fill his payroll.

“Butch was passionate about three things – his God, his family and his company,” said sister Renee Anderson. “But a close second to any of these was sports, and in particular, baseball.”

He was involved in all aspects of baseball programs in Opp, from the building of the Opp Recreational Complex to the Little League Fields. He coached the city league “Reds” and taught many young boys the skills of baseball, as well as the ethics of the game.

“He was passionate about baseball, and he was also passionate about the umpires, ” said Scot Shanks, a business associate who delivered one of the eulogies at Paulk’s funeral. “Many an umpire has been forced to pause and listen as Butch enlightened him about the rules of game.”

As well as being a force both behind home plate and in the dugout, Youmans, through H.B. Paulk, sponsored a team in each division every year according to Josh Kyser, Opp recreation director.

“We could always count on him when a team needed a sponsor,” Kyser said.

Youmans was also known for his financial contributions to area athletics, instituting the Opp High School “Gold Club,” an athletic fundraising venture that “wouldn’t be used to buy just T-shirts.” Youmans convinced local businessmen to contribute $1,000 annually that was earmarked for sports equipment or a sports building project.

“The Gold Club is the life-blood of the current Booster Club,” said Coach Jack Whigham. “Without it and the Booster Club, our athletic programs would have a hard time enjoying the quality of sports we now have.”

Youmans’ love of sports was also strong in his son, Spencer, who after graduating from OHS in 2009, went on to play baseball at LBW Community College and later Auburn University at Montgomery.

According to wife Donna, seeing their son play baseball was not only a joy, but also a medicine far beyond any that medical science could supply in his final days.

“Seeing Spencer pitch for AUM and under the same coach that (Youmans) played his college ball at LBW under, was a dream come true, and filled his last months with meaning,” Mrs. Youmans said.

“He didn’t want to miss a game,” she said. “Even when he was sick from the chemotherapy and the other procedures he had to go through, he would be at the next game. If we could get him to talking baseball, even when he was in unbearable pain, you could see a change in his expression and the pain would fade into the background.”

But there was one match up Youmans didn’t get to see before he passed – the wedding of daughter, Savannah. Youmans died two weeks before her June 8 wedding date, but he was able to see the couple receive a ‘marriage blessing’ at his hospital bedside, one day prior to his passing.

A 1977 graduate of Crestview (Fla.) High School, Youmans played baseball at LBW and following his church’s tradition (Church of Jesus Christ of Latter-day Saints) spent two years on the mission field in Belgium. After returning from Belgium in 1983 and earning a business degree at Utah’s Brigham Young University, Youmans returned home and was named general manager of H.B. Paulk. At 27, he was named president and CEO.

Under his leadership, the company grew from 25 employees to 250 and became one of the top 40 distributors to convenience stores in the nation and was the second in Alabama.

When H.B. Paulk was sold to H.T. Hackney in 2007, Youmans remained on staff as its general manager.

“Butch had visions of doing more for his community, but his time ran out,” Anderson said. “I know that if there had been a way, Butch would’ve been at the complex, watching those boys play the game that he loved the most – baseball.”

Can you feel it? Are you aching for it? Have you started to set out your favorite team’s gear? I’m... read more