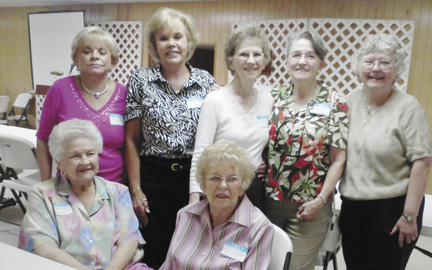 The annual Burrell Jackson and Cornelia (Hare) Stokes reunion was held on Saturday, June 29, in the fellowship hall of the Cedar Grove Church of Christ on Brooklyn Road in Andalusia. The location seems quite appropriate because this couple help establish in 1916 this congregation of Christians in their home, located on Chalk Hill, about a mile east of the current church building.

This reunion featured the children and grandchildren of Burrell Jackson and Cornelia’s oldest son, Wright Absalom “Ab” Stokes, and his wife, Minnie (Rabren) Stokes. The history program was a power point presentation showing the various generations in this particular family. This genealogy will be outlined later in this writing.

Reunion activities began with each attendee registering on specially designed forms titled by the various children of Burrell Jackson and Cornelia Stokes. On these each person provided current contact information for future communications. These were arranged on a white-skirted table with a dark green overlaid cloth. Next to this station was a similarly decorated table featuring several types of family records: photos, photo albums, family notebooks, reunion summaries, and a very special family heirloom.

Sylvia (Stokes) Jordan of Tallahassee, Fla., displayed a double-barreled shotgun that was handed down to her from her great grandfather, Burrell Jackson Stokes. Burrell gave the gun to his son, Wright Absalom Stokes, who presented it to his son, Absalom Silas Stokes, who in turn handed it down to his daughter, Sylvia, since he did not have any sons. Sylvia will now be able to pass it on to the next generation, a great, great grandchild. Some plan to research the gun, which was manufactured by Bright Gun Company.

From 10 a.m. until 12 noon, the relatives visited between themselves reacquainting themselves with others and meeting new cousins, etc. Pictures were shown and family stories shared as everyone enjoyed the period of fellowship.

At noon, Curtis Thomasson, great grandson, extended a welcome along with announcements and helpful instructions regarding the meal. Larry Phillips, husband of Retta (Hicks) Phillips who is a great, great granddaughter, worded the invocation. Everyone then enjoyed making favorite selections from the great variety of delicious dishes. And the dessert table was beyond imagination.

Following the dinner, everyone was introduced according to the line of descent from Burrell Jackson and Cornelia (Hare) Stokes. Then a history program was presented by Retta Phillips and her daughter, Rachael Phillips, during which they shared a power point of photos and stories of the Wright Absalom Stokes family. Afterwards, Retta’s mother, Virginia (Garrett) Hicks, shared some of her favorite family anecdotes. Gary Hicks, Virginia’s first cousin, also shared a memorable family story.

Clyde E. Stokes, a special guest from Jacksonville, Fla., was recognized, and he explained his Stokes family research and future goals. He hopes to clarify his relationship to Burrell Jackson Stokes and help discover earlier ancestors in this family. He plans to eventually publish a book covering his many years of extensive genealogical work related to the Stokes line.

The program portion of the reunion was concluded by presenting prizes for the following recognitions: Traveled the farthest—Armen and Jackie Melikian from Berthand, Colo.; oldest male—Joe Nall of Montgomery at 86 years; oldest lady—Clara (Stokes) Bass of Andalusia who is 95 years young; Youngest—Hampton “Champ” Stokes of Crestview, Fla.; and oldest in the family with the most in attendance—Syble (Stokes) Nall, daughter of Lamar and Flossie Stokes.

A major effort was made to have each family to complete a family lineage sheet with all pertinent data relative to full names and dates, etc. Some were submitted before leaving and everyone else was requested to send theirs as soon as possible.

Those from the Matthew VanBuren Stokes, Sr. line were Sheila Parrish and son Kevin Parrish from Daleville; Clara Bass, Patricia Grissett, and Jerry and Mary Lou Bass of Andalusia.

Ab and Minnie reared their family in Florida and Andalusia. He worked with road construction in Florida until he began to have mini-strokes. While there Minnie operated a boarding house and cooked for her tenants. After Ab’s health begin to fail, they returned to Andalusia where he purchased a grocery store, located on west side of South Cotton Street and down from Thagard Drug Company, and it became Stokes Grocery. The older children helped operate the store. Ab would walk from Stewart Street to the store for exercise, and he would stop by Thagard Drug Store for a while to play dominoes. His daughter, Cornelia, and her husband operated a café in downtown Andalusia.

Plans are already underway for the 2014 Stokes Reunion at which time the family of Ab’s sister, Delilah (Stokes) Rabren, will be featured. All descendants are asked to mark their calendar for this event to be held on the last Saturday in June 2014.

Anyone who has any question regarding this writing or who is a Stokes family researcher is requested to contact Curtis Thomasson at 20357 Blake Pruitt Road, Andalusia, AL 36420; 334-222-6467; or Email: cthomasson@centurytel.net.

HISTORICAL MEETING: The Covington Rifles Camp, SCV, will be meeting at 6:30 p.m. on Thursday, July 11, in the Dixon Memorial Room of the Andalusia Public Library. Guests including members of the local UDC chapter are invited to attend.

It seems appropriate that an antique shop would help breathe new life into an old building Picket Fence Antiques and... read more