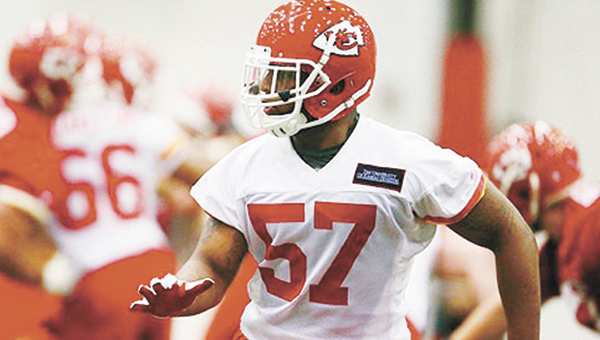 Nico Johnson is competing for the inside linebackers spot with teammate Akeem Jordan. | Courtesy photo

Under a cloudy dome in St. Joseph, Mo., Nico Johnson finds his runner, takes a good angle and lowers his head for a great tackle.

Johnson and the Kansas City Chiefs have been going through training camp this week at Missouri Western State University.

Wednesday was designated as an off day for the players, who have been going through a more up-tempo style of practice under new head coach Andy Reid.

The Chiefs have a live web video program called “Chiefs Live” that’s broadcasted on their website. The program has highlighted different segments of training camp this week.

On Tuesday, Mitch Holthus, the voice of the Chiefs, and Kendall Gammon, a former NFL player, talked about the inside linebackers battle between the Andalusia native and Akeem Jordan later in the show.

“This is a spot a lot of the fans are interested in,” Holthus said.

The inside linebackers battle is between two different players who are on different playing fields. Johnson is a rookie who is just getting started and Jordan has experience as a defender, playing for Reid’s former team, the Philadelphia Eagles.

“They’re going to be competing each and every time (they have a chance),” Gammon said about the battle for the starting spot.

“This is a big physical guy who runs well,” he said. “He can run from sideline to sideline very efficiently and make the plays.”

Both hosts lauded Johnson’s ability to take a great angle running back Anthony Sherman during camp this week.

“I like the way he holds himself,” Gammon said. “I think he’s going to be a great force in the locker room.”

An on-the-field reporter caught up with Johnson during camp and asked him what it’s been like playing with the veterans.

“The tempo has picked up a little bit,” Johnson said. “Everybody has been held to a higher standard than before. The veterans have set the tone and let people know who are the leaders.”

Johnson was asked how important it is for him to develop his skill at covering the pass.

“Being a run stopper is what I do best,” he said. “One thing I want to improve on is defending the cover. Other than that, I feel like I’ve improved a lot.”

When asked whether it’s important to get the starting role this season, Johnson said whatever role the coach gives him, “I’ll take advantage of it.”

The first preseason game for the Chiefs is right around the corner on Fri., Aug. 9.