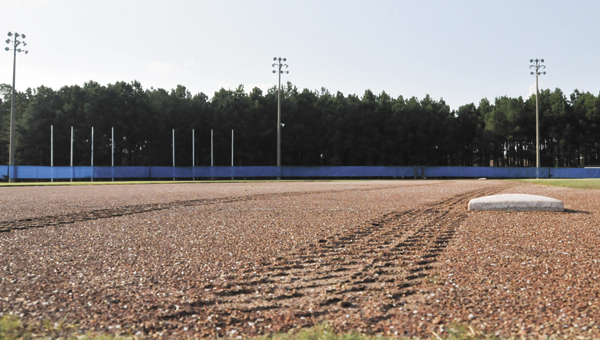 From weed eating to making sure the chalk lines are straight, it takes a lot of hard work to keep a baseball field looking good.

That’s especially true for LBWCC assistant coach Brandon Ware and a few others as they are getting Crum Foshee Field in tip top shape for the upcoming 2013 16-18 Babe Ruth Baseball World Series.

Ware said it’s taking three things to get the field ready for the big tournament that starts in one week.

“Time, manpower and planning,” he said. “Getting the actual field ready takes time for it to heal from previous games. It needs constant manicuring, such as weed eating and edging.”

In order for the job to get done well, Ware said more than one person is required.

“For this World Series, the manpower and resources from the Andalusia city crews have been huge,” he said. “Several county parents have also volunteered in the evenings to help with cleaning up around the facility.”

From holding regular-season baseball games for the Babe Ruth league to a state tournament, Crum Foshee Field has seen a lot of action this summer.

Ware said in between each game, the field must be drug, the mound raked and tamped, the plate raked, the batter’s box re-chaled, baselines re-chalked, bases swapped out, on-deck circles moved and the infield dirt watered.

“That must all be done as quickly as possible to make sure the next game starts on schedule,” he said. “In the event of rain, you must make sure you have enough help to fix and-or prepare the field for play.”

During the summer, those who maintain the field are Chad Taylor from Evans Barnes Golf Course, LBWCC head baseball coach Steve Helms, Chuck White and Ware.

“Chade does an excellent job with out turf year round,” Ware said. “It seems as though every visiting team comments on how great our grass looks and plays.  That includes college teams, high schools and the various teams that play at LBW during the summer games and tournaments.”

Recovery time for the field depends on how much it’s been used, the coach said.

“That mainly depends on how many games were played on it, how many consecutive days and how the weather was during the time the games were played,” Ware said. “During our season, the field usually has days between actual games whether we are off or playing on the road, so it has a chance to recover. During tournaments and consecutive days of multiple games, it may take the field several weeks to fully recover. It is very beneficial for players to stay off the field completely during that time.”

For the World Series, Ware said the field will be getting a new windscreen for the outfield fence; the dugout rails have been covered with new padding; there will be new fence protectors added; the foul poles are painted; the stands and backstop bricks have been been pressure washed; new bases will be put on the field; there will be new on-deck circles; and large polar cool fans have been placed in each dugout.

Additionally, the Opp recreation department brought in stands for the event.

When asked why it’s important for the field to look great for games, Ware said it can keep the players safe and allow them to play the game at a high level.

“Also, you want players and fans to enjoy playing on the field and watching games at the facility,” he said.

Past, future to connect at alumni game

Andalusia alumni and current football players will square off in their annual meeting tonight at 6 at AHS Stadium. The... read more