Johnson to sit out 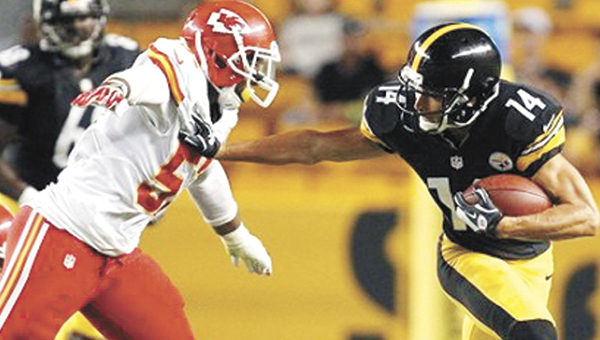 In a telephone call Wednesday afternoon, the Andalusia native said his ankle was “rolled on” last week.

“I’m sitting out this week so I can get better for next week,” Johnson said.

Johnson said he wishes he could play this week not only to get some more reps in, but also it would’ve given him an opportunity to face former teammate Eddie Lacey.

“It would’ve been different playing against Lacey,” he said.

All throughout the week, the NFL has cracked down on its teams to make cuts to reach the mandated 53-man roster by Saturday at 5 p.m.

When asked what he’s thought about all of the cuts being made, Johnson said “it doesn’t matter” because a lot of his friends across the league have been cut.

“I’ve just got to keep getting better,” he said.

Coaches decided to hold Johnson from practicing this week in the lead up to tonight’s preseason game.

Johnson said he will be on the side lines tonight at Arrowhead Stadium supporting his teammates.

Throughout training camp, practices and his first three preseason games, Johnson has turned heads on the team and elsewhere.

He’s said the experience has been good.

“The speed of the game is a little bit different than in college,” Johnson said. “Everybody’s been a little faster.

“I had first-game jitters, but I calmed down,” he said. “I started to earn my keep.”

Johnson said he’ll be ready to go next week and is pretty excited about the first game of the regular season, when the Chiefs visit Jacksonville to take on the Jaguars.

“I want to get the season going,” he said.