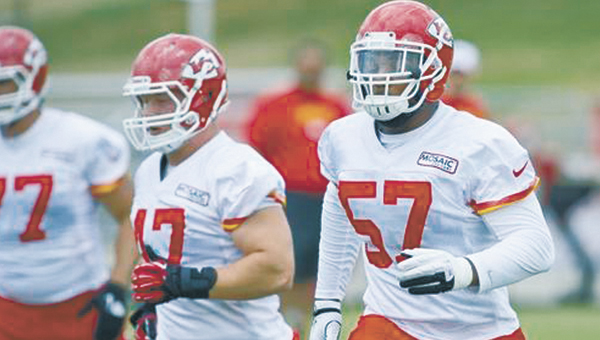 For the first three regular season games, Nico Johnson waited for his turn to make his NFL debut.

Last week, the Andalusia native got his chance as he played on special teams for Kansas City in the Chiefs’ 31-7 rout over the New York Giants.

Johnson spoke with a team reporter recently and said a standard was set by the veterans a while back.

The goal now is to keep living up to that standard, he said.

The Chiefs released their depth chart heading into this week’s road game against the Tennessee Titans.

Johnson is listed as the No. 2 inside linebacker behind you guessed it, Akeem Jordan.

Johnson and Jordan were in a position dual during preseason and their training camp days before the local stand out was injured in third preseason contest against Pittsburgh.

Since then, Johnson has been hampering the injury, only being reactivated recently to full practice status.

The interview with Johnson was held shortly after week three.

“Defense can win games,” he said. “But, we all know offense wins games. Defense wins championships. No matter what situation we’re in, the defense has to go out and stop the offense. We’ve got to go out and make a stop when we can.”

Hopefully, Johnson will be making a few stops of his own at the inside linebackers spot this week in Nashville.

That’s it. I can’t take this anymore. I have a confession to make: I’m a fan of pro wrestling. Let... read more