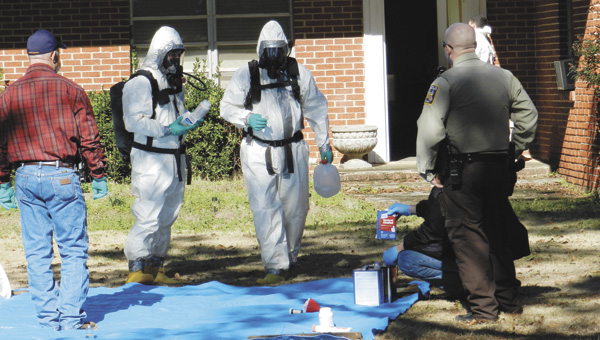 Agents had to ‘suit up’ to protect themselves against the toxic fumes found inside the home.

After authorities chased down a local lead on a series of burglaries in Georgia, two repeat drug offenders found themselves back in jail – this time on charges that spanned two states.

What DTF agents found was a red-phosphorus methamphetamine lab – making it the fifth meth lab found in the county in four days.

Feagin and his girlfriend are no strangers to law enforcement, said DTF agent Greg Jackson. Star-News archives show that each was out on a $500,000 bond from an October arrest for allegedly possessing 11.5 grams of ICE methamphetamine with the intent distribute the drugs.

It was because of Feagin’s drug history that agents took every precaution Tuesday when attempting to question him about the stolen Georgia property, Jackson said.

“We knew he was probably going to be a problem,” he said. “We beat on the front door for about 10 minutes after we arrived. We heard him lock the door on us and then could hear him in the house, running. We entered the house and had to chase him to the back of the house.

That was when he actively began resisting arrest.”

After Feagin was taken into custody, a search of the brick home at the site of the former Adams Fish Farms revealed a multitude of items used to manufacture methamphetamine, as well as two different types of meth and an assortment of items matching the description of those taken during the Georgia burglaries.

“We found ICE, which is typically made in a Mexican super lab and shipped out, as well as cooked product,” Jackson said.

As the afternoon progressed, agents quickly filled a blue tarp with chemicals, containers and jars filled with meth oil, as well as an assortment of small lawn maintenance equipment.

“Mr. Feagin is also going to face additional charges since he is wanted in Georgia after video surveillance put him at the scene of the burglaries, using the same truck we found here in his yard,” Jackson said.

When you add up the qualities of Andalusia Middle School math teacher, Amy Bryan, it’s no surprise that she is... read more