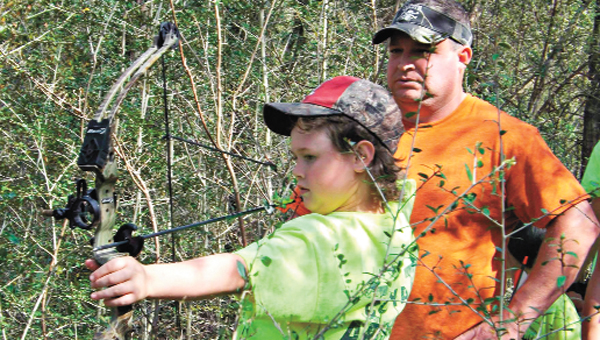 Jacob Pate was diagnosed with legg-perthes disease and is now shooting archery with the Covington County Youth Archery Association.

Jacob Pate went from barely being able to pick up his feet to standing tall in a matter of years as the Red Level fourth grader is competing in tournaments for the Covington Count Youth Archery Association.

At 4 years old, Pate was diagnosed with legg-perthes disease, which attacks joints in the hip area, his mom, Wendy said.

“It was about 2009 when he had surgery because he got to the point where he couldn’t pick his feet up and stand up straight to walk,” she said. “They inserted two pins and eight screws into his hips.”

Because of the disease and surgeries, Pate can’t play any contact sports, which include football and basketball.

“Because he can’t run as well as the other children, he doesn’t have enough confidence in himself to play baseball,” Wendy said. “He loves hunting and fishing, and to be able to be in archery is good for him.”

During the Friendship Tournament two weeks ago, Pate finished in third place in his division.

“I like archery and it’s fun,” Pate said. “It’s fun for me because I get to hang out with my best friends and do what we like together.”

Pate’s diagnosis came after he fell while running on a playground when he went to pre-kindergarten in Crestview.

Wendy said she picked him up from school and felt like he was OK at the time, however.

“He got to the point where he couldn’t get up in the morning and would have a hard time walking,” she said.k “His fall came right when the kids got out for spring break.”

After the spring holiday, Jacob went to a pediatrician in Florida, who said it may have been arthritis. One X-ray later, the legg-perthes disease was evident in his left hip.

“He told us that he was sorry and that (Jacob) had legg-perthes, and made an appointment to confirm it,” Wendy said. “The other specialist wasn’t a child orthopedic specialist, and said we were lucky to find it at his age because most people who have it are teenagers.”

Wendy said the disease becomes irritated by the time those who have it become teenagers.

“When the body starts to heal itself, the bone spots go flat instead of rounded,” she said.

Eventually, Wendy said, Jacob will have to have a total hip replacement in either his late 30s or 40s.

Jacob went from his orthopedic specialist to another at the Nemours Children’s Clinic in Pensacola.

As a patient there, doctors kept an eye on the disease and Wendy said the family moved back to Alabama, and went a while of not going to the doctor.

“He had it in his left leg, but started to have problems in his right leg,” Wendy said. “We took him to a doctor in Evergreen.”

Another orthopedic doctor’s visit in Birmingham yielded that Jacob’s right hip was also affected by the disease.

“He has to sit down and get dressed,” Wendy said.

Jacob went on to have two surgeries — one of which lasted for 7 hours, 30 minutes — that ended up with the archer in two leg casts that were being separated by a piece of wood.

“After he had surgery (in November), his legs were A-shaped, and were the width of a twin bed spread out,” Wendy said.

Wendy said doctors took bone out of his right legs, reshaped the ball out of his hip and put it back into the socket. He stayed in his casts until the next February.

“He had to go through physical therapy and he was so young, that he didn’t remember how to sit up,” she said. “he lost a lot of muscle mass, and had to take therapy to learn to walk. It took him a long time to get back in the swing of things.”

Now that Jacob’s back on his two feet, he’s taking his archery quite seriously.

His mom said it’s rewarding to watch him compete in the sport because it gets him “out of the house.”

“He has younger sibling (sister, Emily), and she’s into a lot of things,” Wendy said. “She’s a cheerleader and majorette, and she has tons of options for her.

“Now he’s actually doing something he likes and it gets him out of the house,” she said. “He seems so much happier.”