RLS senior knows someone from each state 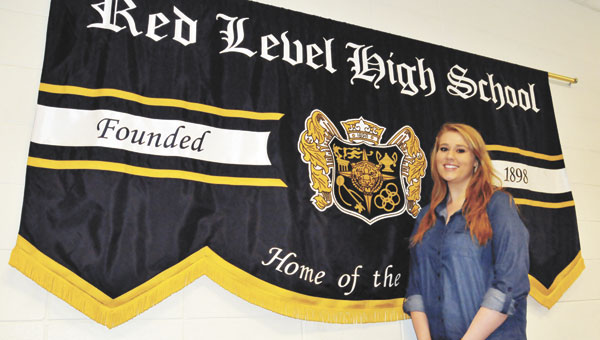 That’s the mantra Red Level senior Alexandria Selman held onto as she recently represented the state of Alabama as a delegate on the NRECA Youth Leadership Council at the annual meeting in Nashville last month.

During her junior year, Selman competed in the Covington Electric Cooperative Youth Tour program by winning an essay competition at her school. From there, she’s been pretty busy going on to win at the Washington Youth Tour interview competition as well.

“It’s basically a leadership experience that we get to go on,” she said of the competitions. “You have the local youth tour, state youth tour and national youth tour.”

After she won the essay competition in her junior year, Selman won the chance to tour the state capital in Montgomery.

In addition to the RLS senior, Pleasant Home’s Corey Self went to the nation’s capital.

By winning the interview competition at the Washington Youth Tour, Selman was selected to represent Alabama on the Youth Leadership Council at the meeting in Nashville.

“I had the opportunity to meet kids from all over the country,” Selman said. “There is a delegate from every state. It’s pretty neat to be able to say that you know a person from every state.”

Typically what takes place at the leadership conference and youth tours revolves around gaining skills to be a leader, Selman said.

When asked what she’s learned from attending these conferences and youth tours over the past two years, Selman said that “good things come from small packages.”

“We had to write a speech when we went to D.C. that we had to give,” she said. “They told us the speech had to be about something you took away from the whole youth tour experience. When I was sitting there thinking about what to write, it hit me.

“When I interviewed for (the) Washington and statewide (tours), I didn’t think I would get picked. I was competing against kids from all over the state — from big schools,” she said. “When I was writing the speech; it hit me, that good things come from small packages. That regardless the size of my high school or where I come from, and that I determine my own fate.”

This fall, Selman will be attending the University of Alabama, where she will be majoring in pre-law.

Selman said she’s sad that the experience is over and found it to be rewarding as a whole.

“Cooperatives will always hold a special place in my heart,” she said. “I’ll forever be thankful for the experience that they gave me.”

Selman is the daughter of Larry and Brenda Selman of Red Level.

School starts Monday – are you ready?