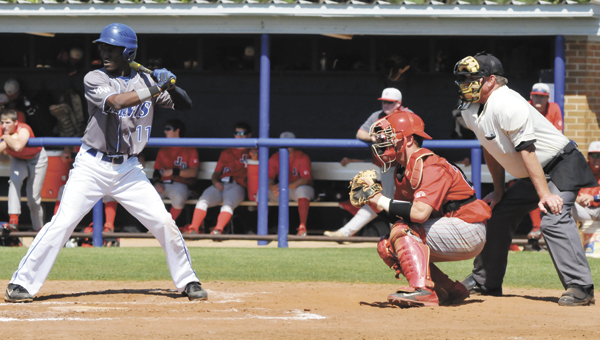 LBWCC’s Monterio May waits for a pitch during the first game of the Saints’ conference series against Jefferson Davis Thursday. | Andrew Garner/Star-News

LBWCC split with Jefferson Davis on Saturday in a conference doubleheader at Crum Foshee Field in Andalusia.

The Saints lost an early lead in game one, where the Warhawks scored five runs in the sixth inning in a 14-4 win, but bounced back to claim game two, 5-4.

In spite of spitting with JDCC, LBWCC did indeed lose the series 1-2.

The Warhawks scored six runs in the ninth.

Mason Rogers and Conner Smith led LBW and went 2-for-4 each. Rogers had two RBIs.

Roquel Marsh and Zach Ward had one RBI each.

JDCC’s John-Mark Cosby, Alex Jones and Brandon Davis had three hits each to lead the Warhawks.

Chance Calloway got the loss as he went 5.1 innings and allowed seven runs on 10 hits.

LBWCC rallied from a 4-2 deficit and scored two runs in the seventh and one run in the eighth inning in the win.

Saints pitcher Jed Carter struck out three and allowed one hit in 3.1 innings to get the win on the mound.

Marsh, Ward, Jud Owens, Dusty Jones and Blake Grill had one hit each to lead LBWCC. Rogers, Jones, Payne Wilson and Brandon Mayhann had one RBI each.

Alex Jones led JDCC with two hits and an RBI.

LBWCC scored one run each in the first and second innings to build a 2-1 lead.

The Saints will be back in action on Thursday at home against Faulkner State for the first game of another three-game conference series.