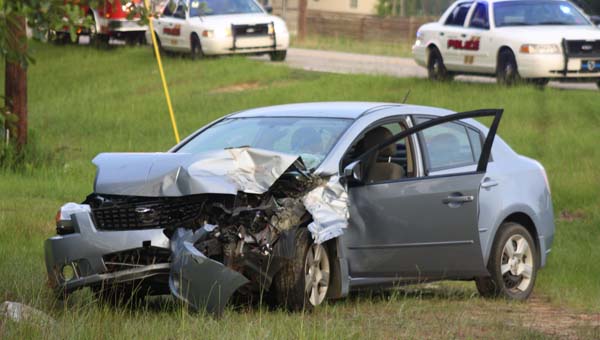 Melinda A. Denny, of Andalusia, was killed in a single-vehicle accident Monday evening.

A one-vehicle accident Monday evening claimed the life of an Andalusia resident.

According to information released by the Andalusia Police Department, 49-year-old Melinda A. Denny was killed after her 2009 Nissan Sentra left the roadway while headed west on the South Bypass and struck a parked Caterpillar motor grader head on.

Moments after accident Monday at approximately 7:07, APD Sgt. Nic Ireland said it was unclear what caused Denny, then unnamed, to lose control of her vehicle.

That aspect of the crash is still under investigation, according to APD.

Denny’s vehicle traveled approximately 30 feet before striking the grader. She was the vehicle’s lone occupant and was transported by Advanced EMS to the nearby Andalusia Kiwanis Center, where she was taken by Air Heart helicopter to Sacred Heart Hospital in Pensacola, Fla.

Denny later succumbed to her injuries and was pronounced dead at 9:08 p.m. The cause of the accident remains under investigation by the APD.

A man wanted in connection with three murders in Florida, who also has ties to Florala, was captured early Tuesday... read more