PGA golfer: Put your pride aside, ask for help 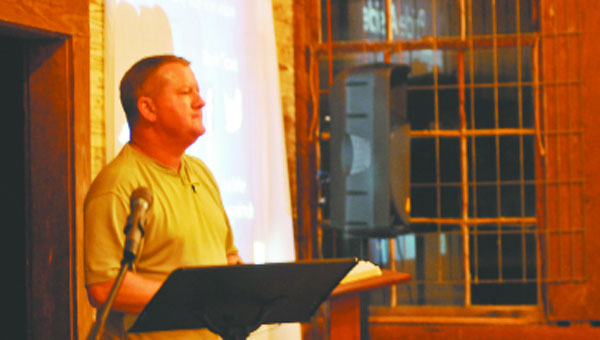 Hutton was the guest speaker for the Old School Men’s Meeting Thursday night at the Stanley Community Center, and shared his journey in dealing with his son’s addiction.

Hutton, a former PGA golf professional, wrote a book — “Pride Aside: A Father’s Journey Through High Son’s Addiction” — about dealing with his son Ben’s addiction and the pain one goes through.

He didn’t sugar coat anything during his address.

“I imagine a lot of you guys are in pain,” Hutton said as he went on to describe the many types of pain people deal with on a daily basis.

“Pain points you either toward or away from God,” he added.

Hutton has two sons, Michael and Ben. Michael is the youngest and since he could walk, he wanted to do all things military and or law enforcement, the proud father said.

Ben is the oldest and is now 24 years old. When Ben was 13, Hutton said, he saw a change in his boy when he wouldn’t have his picture made with him during his baseball team’s picture day.

Hutton said Ben pushed him away.

By the end of Ben’s 10th grade year, he had suffered his first overdose on pills.

Throughout Hutton’s presentation, the former golfer had a slideshow going to help tell the story.

After his first incident with drugs, Ben spent the next two years of high school as a star athlete for football and track. He won multiple state titles in track and field, and things were looking up when he was invited to play at Southern Mississippi.

However, Ben never made it on the football field at Southern Miss as he was arrested for driving under the influence.

Hutton said that was a sad time in his son’s life because he didn’t seem happy.

Things got a little worse for Ben, whose friend at SMU killed himself. Ben wanted to transfer and decided to go play at Ole Miss.

But again, he never got on the field.

Ben passed out during workouts after taking too much attention deficit disorder medicine prior to, and was sent to the ER for the first of many trips.

Throughout this time, Hutton was there for his son and put up safeguards for him to abide by.

Hutton said his son ran into the wrong end of the law after being arrested for fighting at a bar. Ben saw counselors and told his dad that he was doing more drugs than he knew.

“He actually got a certificate saying he’d done better,” Hutton said about his time staying sober.

Ben got himself in a pickle sometime later, this time calling his dad at 2 a.m. — as he did many times — and telling him that “someone shot at me.”

Hutton said after picking his son up, Ben was yelling that he was going to kill his friend, Dalton.

At this point in his talk, Hutton told a short story about how his wife had already picked out pictures for her son’s funeral from the six-drawer chest filled with family photos.

Hutton said 10 days later Ben was back in the emergency room and actually signed the “do not resuscitate” paper work.

But his mom sent out a group text to her Sunday School class, which said “Pride Aside… we need prayer.”

Back at home, Michael was on his first ride along with a patrolman and responded to the suicide of Ben’s best friend, Dalton, who had also been having a tough time.

Hutton said his son went in and out of rehab, and he decided to play tough love when Ben was shot a second time.

Hutton drew a map from the hospital to the nearest rehab clinic that would take him to get better.

Hutton said Ben didn’t realize that the gunshot to his head was real, and another trip to rehab ensued.

But it took another trip to jail and a trip to rehab No. 5 for Ben to realize that he really needed to stop and clean up his life.

Hutton said Ben held out his fist for a “fist bump” and told him that he’s given him enough to write a book about his life.

“The happy ending is that he’s breathing today,” Hutton said.

As he did early in his talk, Hutton asked one question near the end of his talk.

“Are you going to run to God or run away?”

The Star-News is seeking information about the thefts of four newspaper racks stolen over a two-night period. The red newspaper... read more