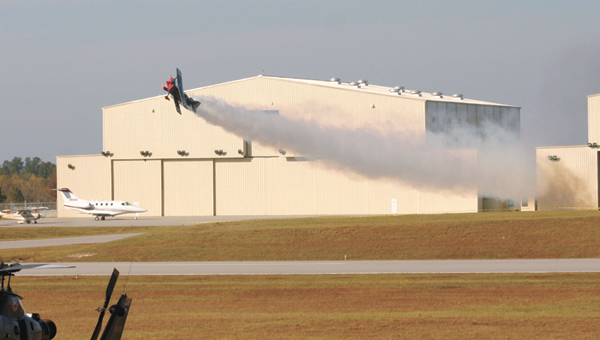 Shown is one of the twin hangars. | File photo

The Covington County Commission approved a resolution Wednesday appointing the Frazer Lanier Co., as the underwriter for its part in paying down the debt for the airport bond issue, a measure that will ultimately leave the airport authority “free and clear” of the more than $12 million in debt it has acquired in the last decade.

The bonds currently are held by the airport authority and are secured by the county and the cities of Andalusia and Opp.

Most of the debt was incurred in the construction of hangars for industries or industrial prospects, and sit on airport property. However, neither the property nor the structures will be used as collateral in the proposed restructuring of the debt. The proposed new bond issues will leave the airport free and clear of all debt, Covington County Economic Development Director Rick Clifton said previously.

“The airport will not be behind the bonds and the airport property will not stand behind it,” he said previously. “The airport wouldn’t be responsible.”

In a poll vote, County Commissioners Joe Barton and Kenneth Northey voted for the resolution, while Harold Elmore and Carl Turman voted against.

Commission Chairman Bill Godwin, who only votes in case of a tie, also voted yes.

Turman said he voted no because Merchant Capital has been good to the county.

“Then, all of a sudden, we’re just going to drop them and go to somebody else because we think they got a little better price,” Turman said. “You can’t really tell about the cost of this thing going out yonder somewhere when all of the bonds are sold, and all of the deals are made. It’s not like it’s made today.”

Godwin said he favored the proposal because of the total amount of payback the county would have to pay.

“Frazer and Lanier had the smallest amount of total payback, and the fees were nearly about the same,” Godwin said. “So, therefore that’s the reason why I voted for it.”

Godwin said the total payback is more than $6.4 million, adding that the number of years they have to pay it back within will be determined later.

“Plus, there’s got to be an agreement signed between the three entities that we’re all going to do this — Opp, Andalusia and us,” he said. “By going this way, we can structure our bond issue the way we want to pay it back, which we intended right now. The consensus is that we’re going to pay ours back as soon as possible, whereas Andalusia and Opp will defer some of their payback into the later years.”

• agreed to be a $100 sponsor for the Megan Kelley Smiles Foundation’s sMiles for Megan first annual 5K run;

• approved an agreement with the City of Florala for the emergency stockpile of material on the previously-owned county District 3 property;

•  reappointed Lance Price and Wayne Godwin to the Covington County E-911 Board;

• approved the county EMA’s request for payment of an outstanding fiscal year 2014 invoice regarding radio installations;

• accepted a low bid of $36,000 from Asphalt Specialists of Evergreen for jail sewage modifications; and,

• voted to go into closed session to discuss the job performance and general representation of public employees within the county’s road department.

The commission did not reconvene after going into private session, using it for discussion only.

Tiffany Knoll has helped led the Lady Eagles into the postseason. The Pleasant Home Lady Eagles are one step closer... read more