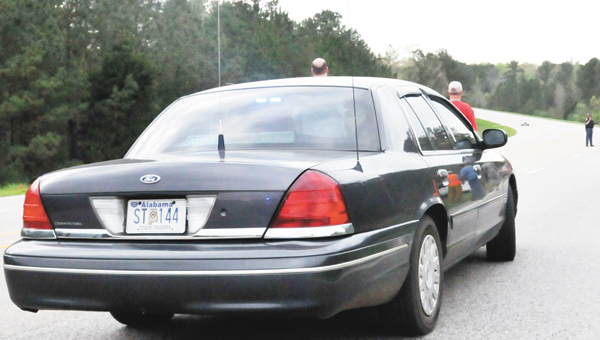 Shown is a state trooper vehicle at a wreck in Covington County. | Andrew Garnerr/Star-News

Eleven State Troopers from the Dothan Trooper post could lose their jobs, the post could close and there would only be three driver’s license offices in the state, if the governor’s tax proposals don’t pass.

Gov. Robert Bentley visited the Dothan post earlier this week to lobby for his tax proposals and shared some of the potential cuts.

According to a budget presentation provided to the Star-News from ALEA, the department is currently operating on a $55,758,744 budget this fiscal year, and a 30 percent cut would decrease the budget to $39,376,973.

Impacts from the cuts could include:

• Closing 13 Trooper Posts throughout the state, including Dothan and Evergreen;

• Laying off two-thirds of all non-sworn personnel within ALEA;

• Shutting down the agriculture and rural crime unit;

ALEA officials say the reduction in force would severely limits their ability to respond to natural disaster.

Division B PIO Kevin Cook said the layoff would be crippling.

“It will be crippling to the safety of the citizens of Alabama,” he said.

Cook said its still to be determined which troopers would be laid off.

“State personnel decided what troopers would be getting laid off,” he said. “We are developing a plan in accordance with state personnel guidelines.”

Additionally, citizens will be required to travel to one of three locations throughout the state to receive statutorily required license services.

These offices will be located in Birmingham, Montgomery and Mobile.