Mohon honored with Spirit of Andalusia 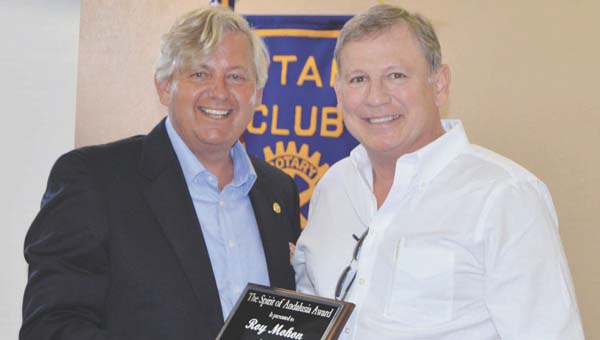 The effect those presentations had on him exemplified why the club’s final presentation was to name him its 2015 Spirit of Andalusia winner and a Paul Harris Fellow.

“You all deserve more than you get,” he told those assembled who work for causes ranging from education to hunger to sports. “I’ve had to say no to some of you, but come back. I’ve got to do better.”

“Roy is very active in supporting baseball, football, ballet – any good cause that comes along,” his friend David Darby said in making the presentation. “I couldn’t tell you all the giving he does, and most of it is done quietly.”

Darby said Mohon was working at McDonald’s when he got to the opportunity to reopen a convenience store that had been closed for six months. He reopened it, and was the only employee until the store became successful. After seeing that success, his next step was expansion, and he added additional stores every couple of years.

Mohon spent his very early years in Covington County, but grew up in an Air Force family. He attended the College of Charleston. Before entering the petroleum industry, he and his son, Chris, lived in South Florida. Mohon moved to Andalusia because he wanted to provide a better education for his son in a public school environment without the divisiveness of private schools.

Mohon has begun transitioning the day-to-day operations of the business to his son, now 29.

As he accepted the award, Mohon described a white clapboard house on the Straughn School Road.

“That’s where I lived when I was a baby,” he said. “A lot of folks like you helped that family. I thank all of you.”

The Rotary Club honors two club members and one community member each year by making contributions in their names to the Rotary International Foundation.

Also honored this year was outgoing Rotary President John Thompson, and club member Billy Bimbo. Bimbo was recognized for his diligence in recruiting new members, and his work with the World Championship Domino Tournament.

Could Moss take a plea?