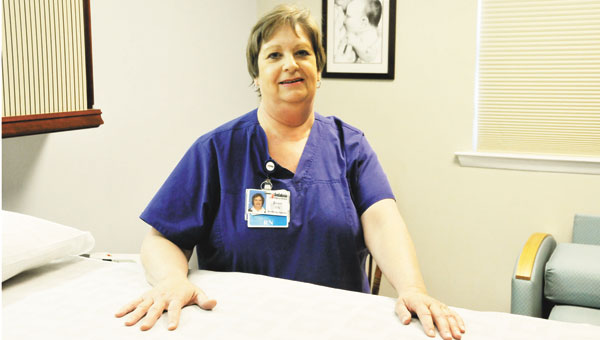 Every working day is a good day for Joan Mills.

For the past 30 years, the registered nurse at Andalusia Regional Hospital has had her hand in delivering a bevy of babies, while also bringing joy to families.

This week celebrates National Nursing Week, and what keeps the Babbie resident coming to work every day is the love of the job. Mills works in the labor and delivery department at the hospital.

“Well, it’s the love for the job,” Mills said. “I think you have to have dedication and commitment, and two, it’s in a good place.”

She said she can’t count the number of babies she’s delivered, but remembers a lot of her patients because eventually, she’s helped deliver their children’s children.

“One patient that I delivered, her granddaughter was having a baby,” she said. “That was neat for them to say, ‘Well this was your baby.’ ”

The Opp native went to LBWCC MacArthur, where she earned her LPN. After going to Wallace-Dothan, she was an RN.

Mills started working at ARH in 1984, 18 years after the hospital opened its doors.

What got her interested in nursing was Mills’ mother, Erma Anderson, urging her to follow in her aunt’s — Mary Whaley’s — footsteps.

“I never actually knew her,” Mills said about Whaley. “She was in an automobile accident when she was killed.”

Mills said Whaley was a nurse at Opp’s Mizell Memorial Hospital, and was talked about often by her mom.

Other than the interaction with other nurses and the birthing part, Mills said she likes being a nurse because you can show your emotions with patients if they’re needed.

“It’s a job where you have to be strong, but not always put on a front because sometimes they’re sad,” she said. “You have those emotions. It’s not bad to cry with them.

“It’s good that you show your emotions,” she said. “I like being able to help them get through the good times and the bad.”

Being that it’s national nursing week, Mills said she thinks nurses are essential to the medical field.

“I think they’re very important,” she said. “I think we’re the back bone of the medical field. Without them, our doctors would be lost.”

“I can’t think of anything else I’d rather do,” she said.

Mills and her husband, Danny, have one daughter, Sabrina.

A Covington County native son, and its longtime state senator, will both be recognized as two of Alabama’s most powerful... read more