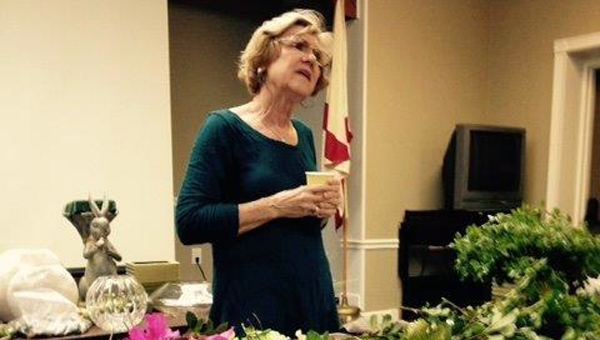 When Inter Se members gathered at the Andalusia Public Library for their April 1st meeting, they found the foyer and meeting room filled with the touches of spring and Easter.

On each table was placed an Easter basket, holding a flower and surrounding it were candy cups and other decorative pieces.

The refreshment table continued the theme with fresh flowers and an Easter rabbit.

Barbara McCommons introduced Barbara Posey, who gave a wonderful program on flower arrangements. Her love for flowers and arranging them began when she moved to Andalusia in 1960.

Two of her neighbors in these early years, Correne Floyd and Bonnie Chesser, were so instrumental in teaching her how to work with flowers and greenery and she gave them credit for her being able to create arrangements today.

She shared two lovely books with members demonstrating beautiful arrangements and rules that are necessary to follow to create them.

Greenery of every description had been cut from her yard and she showed how each could be used to make great arrangements. Many tips were given to help members try creations themselves.

Barbara brought some of her permanent silk flower arrangements she uses at different times of the year when fresh flowers are not available.

A gift was given to the Library in Barbara’s honor for enlightening members with her creative talent in the world of flowers and greenery.

Kate Campbell, master storyteller and highly acclaimed singer/songwriter, from Nashville, Tenn., will be the featured performer at the Brundidge Historical... read more