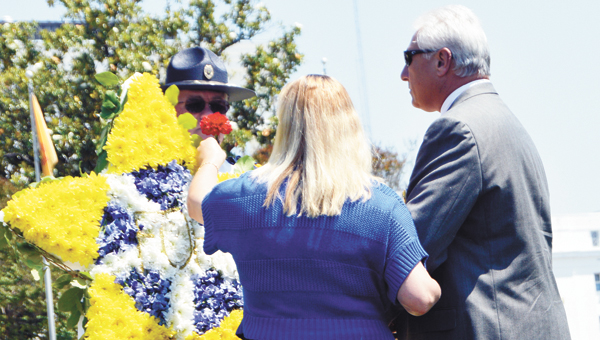 Anita Kelley, escorted by Sheriff Dennis Meeks places a rose in a wreath to honor deputy Heath Kelley, who was killed in the line of duty last year.| Kendra Majors/Star-News

“Greater love hath no man than to lay down his life for a friend.”

Covington County’s Heath Kelley made the ultimate sacrifice last year, en route to help someone in need, something for which his brothers in blue rememberd him after his death.

The Covington County Sheriff’s deputy died in an early morning car accident last April, after his vehicle hydroplaned while he was responding to a crash on Hwy. 55.

Kelley was one of 127 law enforcement officers killed in the line of duty last year.

More than 20,000 law enforcement officers have been killed in the line of duty since the 1700s.

State FOP President TJ Phillip said the event was to honor the fallen brothers and the survivors.

“We want to let everyone in the community know we love each other,” he said.

Gov. Robert Bentley addressed the crowd, and spoke privately with the families of the fallen.

“It is not a time of celebration, but of commemoration of the lives lost,” he said. “Each day law enforcement courageously puts themselves in harm’s way. The sacrifice made by these men – and in past women – is unmatched. I mourn with all the family. I want each of you to know how sorry I am for the loss of your family.”

Attorney General Luther Strange said being a police officer is a calling, not a job.

“There is no ceremony we could have that would take away the pain,” he said.

“No one makes a bigger sacrifice that these made,” he said.

Kelley served in the sheriff’s department for eight years. He worked as a jailer prior to becoming a road deputy.

On hand for Friday’s memorial service were his wife, Anita Kelley; son and daughter-in-law, Ty and Carrie Kelley; daughter and son-in-law, Skylar and Luigi Raggazoni; and brother, Tim Kelley.

May Day event is today