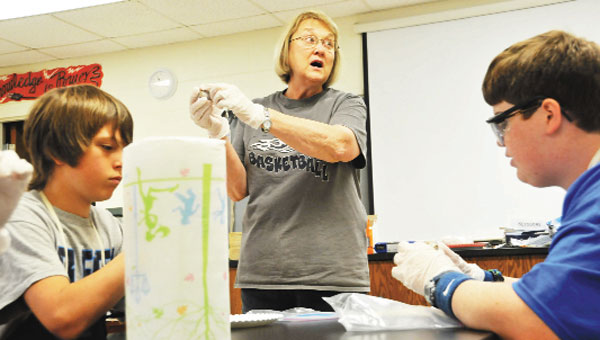 It didn’t take long for a small group of students to tell all about Fleeta Junior High School science teacher Doris McDonald.

“You find the best ways to get students to learn,” a student said.

McDonald will be retiring as a teacher after 39 years in education when the last bell rings on May 29.

Twenty-nine of her teaching years have been spent in the Covington County Schools system.

During the 10 years prior to coming to Opp, McDonald taught in different places as her husband, Opp Police Chief Mike McDonald, bounced around while in the military.

McDonald taught in Ft. Hood, Texas, for five years, then at Weaver Elementary School in Calhoun County, had a three-year stint teaching in Alaska and worked at Ft. Benning, Ga., before making her way to the City of Opportunity.

“It was wonderful,” she said about Alaska. “They had everything you might need.”

McDonald taught first grade at Straughn Elementary in 1986. She then moved to Fleeta in 1992, teaching the fourth grade. From 1996, she served as the fifth through eighth grade science teacher at the small school.

McDonald said she hasn’t always taught science. She received a teaching certificate that allows her to teach any subject in grades K-9.

There have been a lot of changes within the profession since she started teaching in 1976.

McDonald said the biggest change has been the technology aspect.

“It does (make it fun), but it’s also frustrating when you can’t get it to work,” she quipped. “You plan to use it and for some reason, you can’t do it. You can’t get online and something doesn’t work right.”

McDonald said she’s found that the students still have the willingness to learn.

“There are some who are still real eager to learn,” she said. “They love science, so it makes it easy to each.”

McDonald got into teaching because she knew that it was something she was going to do as a career.

McDonald said she decided to retire to spend more time with her husband and other family.

In January, her daughter and son-in-law, Kristen (Eric) Baumgartner, had a baby girl, Emory.

“It’s time for fresh ideas,” she said. “It’s just time. I don’t want to be a crabby apple and the kids say I hate going to that class. I want to leave on a good note.”

In fact, one morning, McDonald said she woke up and decided it was time to retire and that her granddaughter’s birth made it even easier.

During her retirement, McDonald said she hopes to be an active grandmother, be involved with the senior adults at her church and spend more time with her husband.