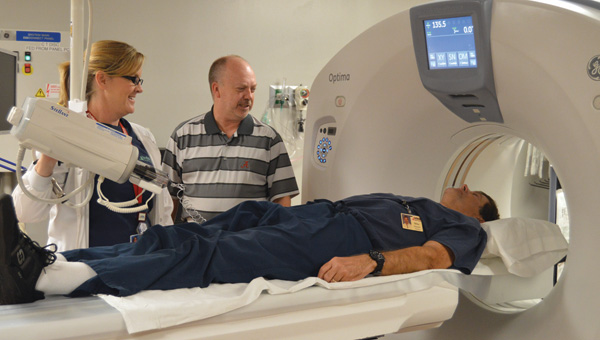 Shown is the new CT scanner at ARH. |
Michele GerlachStar-News

CEO John Yanes said the hospital’s new 64-slice, General Electric CAT scanner is one of the most technologically advanced on the market.

“We had a 16-slice scanner,” Mike Holloway, director of imaging services, said. “This one, every time it makes a revolution, it takes 64 pictures.”

CT technology started with a single slice, or image, in each revolution, he explained. Then, the technology improved to four-slice; then 16; and now it’s at 64.

Kenneth Richardson, MD, Medical Director of Imaging Services at Andalusia Regional Hospital, said, “Our 64-slice CT scanner gives us the capability with its acquisition speed to image the heart and other vital organs. Cardiac scoring, a screening exam used to detect small calcifications in the coronary arteries, is an example of the scanners capabilities.”

“With a needle prick in the arm (to insert contrast), we are looking at the heart,” Holloway said. “It’s a screening tool that’s a lot less invasive than a heart cath.”

Because the new machine is so fast, Holloway said, it’s possible to get images of the heart without motion.

It’s also possible to look at potential problems in other parts of the cardiovascular system.

Richardson said the new technology is as good or better than at many locations in larger markets, which is great for local patients.

“There’s really no need to go somewhere else,” he said.

Both Richardson and Holloway said the new scanner’s safety features, designed to minimize exposure to radiation, are another important aspect. Technicians have the ability to build fields over the head, breasts, or other organs, reducing exposure by 30 percent.

Yanes said the cost of the equipment and the building modifications made to accommodate it cost about $800,000. The hospital worked with a mobile unit during the three-month installation of the new equipment.

“Making our community healthier is our mission,” he said. “Technology is allowing us to capitalize on technology and work with our physicians to fulfill that mission and reduce the need for residents to have to leave the community for care and that’s a beautiful thing.”

ARH does an average of 430 CT scans per month. Approximately one third of those are for emergency patients; the remainder are scheduled, or are for in-house patients.

SALUTING THOSE WHO GAVE IT ALL

Eventgoers released balloons in memory of the officers killed in the line of duty in Covington County throughout the years.... read more