Odom to retire from dream job 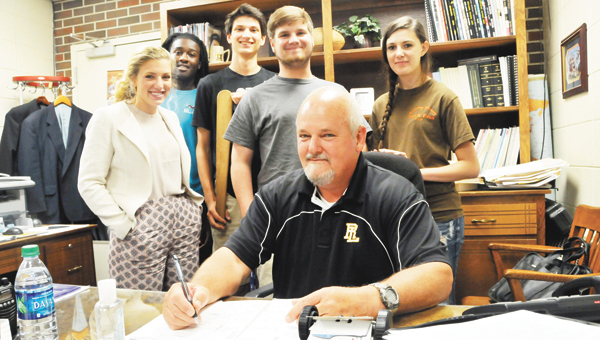 After more than 32 years in education, Red Level High School Principal Johny Odom will be forging ahead in a new role — retirement.

Odom became the school’s assistant principal between 1998-1999, and donned the principal cap not six years later.

Odom’s career began at Castleberry for a short time. He then taught at South Montgomery Academy for one year before applying to become the physical education teacher at Red Level Elementary.

Already having a teaching certificate in science, Odom said he had to go back to school and get certified for PE, which he taught PE for six years.

However, teaching PE wasn’t his passion, and Odom went back in the classroom, where he taught history and math for the next nine years at RLHS.

“I’ve been fortunate,” he said. “I’ve taught every grade level, and just about every subject in every year.”

In addition to teaching the basics, Odom coached on the school’s junior varsity and varsity football team, the basketball team and even the volleyball team as an assistant coach.

“I’ve touched so many students’ lives in many ways,” he said with a smile. “It’s gratifying to have been able to do all that I could be able to do.”

Even though he dedicated so many years in the classroom, Odom said he always knew he wanted to become a principal.

“James Milton, who hired me, was my mentor and role model,” he said. “I’ve held him in such high regard. I hope I was half the man he is.”

Upon graduation from RLHS, Odom went to Auburn University in Montgomery and served in the U.S. Air Force in power production, spending three years in Alaska working on remote radar sites.

Odom returned to Alabama and earned degrees in counseling and administration from Alabama State University.

Odom said while being principal has been rewarding, it’s also been a roller coaster of a ride.

“There have been the best of times and the worst of times,” he said. “I hate to say it, but I’ve been through some tragedies. It’s been a roller coaster ride of ups and downs.”

Being principal at RLHS has been like being a daddy to several hundred kids, Odom said.

“I’ve liked being able to be around and help people,” he said. “We take care of our people.”

Odom admitted that he didn’t want to leave being principal because RLHS is home.

But leaving home is something that Odom knew he wanted to do when his youngest, Morgan, graduates from high school next Thursday night.

Odom said he plans on traveling with his wife, Sandra, quite a bit during his retirement. One of his first stops will be Yellowstone National in Wyoming.

“I don’t know what I’m going to do,” he said about his retirement. “But I know I’m not going to work.”

“The theme is family around here,” he said. “(McGlaun) is that type of person, and I know he won’t skip a beat.”

The Opp City Board of Education met in closed session for approximately 20 minutes Tuesday before approving its personnel changes.... read more